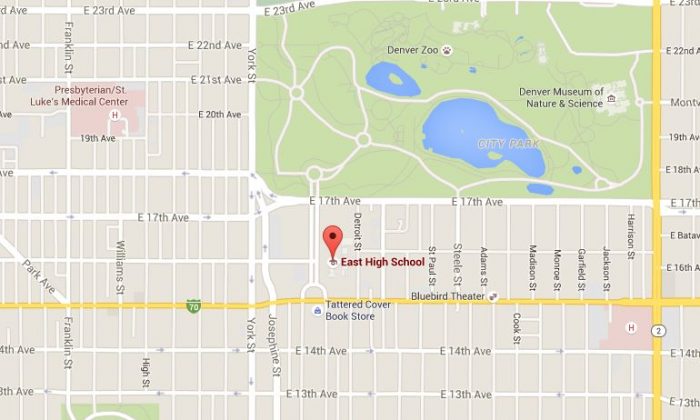 East High School was placed on lockdown on Thursday afternoon, according to reports. (Google Maps)
US

East High School was placed on lockdown on Thursday afternoon, according to reports.

KDVR-TV reported that police are responding to reports of a possible person with a gun on campus.

Police said there’s no reports of shots fired or injuries.

Christine Downs, a DPD spokesperson, told 9 News in Denver that authorities don’t know if the possible gunman is a student or not.

This is a breaking news story. Stay tuned for more updates.

East High School is a public school located in Denver’s City Park neighborhood on the east side of the Colorado city. There’s about 2,500 to 2,600 students that attend the school.

The school is located at 1600 City Park Esplanade in Denver.

Last week, a man armed with a rifle shot and killed three people and wounded more at a Planned Parenthood clinic in Colorado Springs, Colo. The suspect, 57-year-old Robert Dear, was arrested and charged with murder.

Meanwhile, a number of schools and public places have been on high alert following the mass shooting at a San Bernardino, California, social services building that left 14 people  dead and 17 wounded.