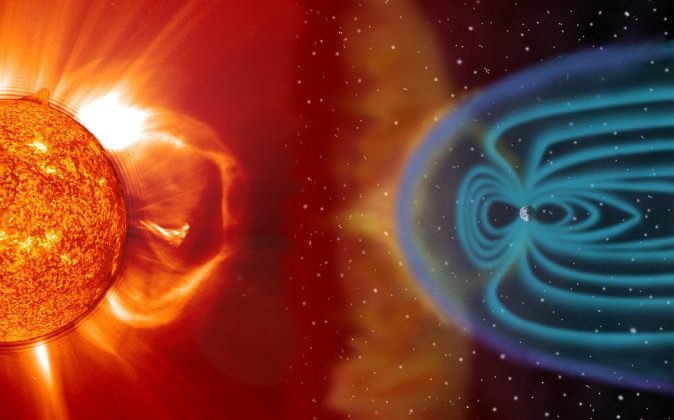 We are accustomed to seeing our Earth as a round, cosmic marble. Continents, water, and clouds color the globe. If we take a step back, however, and look at it from a different perspective, Earth resembles a giant flying angel.

The shape of the giant angel is formed by the magnetic field or magnetosphere of the Earth and solar wind. It is a field that is highly dynamic and responsive to solar wind. It protects Earth and redistributes the impact and energy of the sun—a guardian angel.

The angel seems to fly toward the sun. It’s trailing dress stretches a distance equivalent to 1,000 Earths, past the moon (which is only 60 Earths away).

This guardian angel becomes evident when we look beyond gases, beyond liquids, beyond solids—when we look at a fourth state of matter, plasma. “Plasma often behaves like a gas, except that it conducts electricity and is affected by magnetic fields,” explains a NASA Science News article.

Plasma makes up 99 percent of the visible universe. It consists of a collection of free-moving electrons and ions—atoms that have lost electrons—essentially, molecules that have fallen apart.