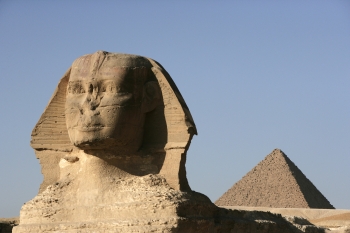 When charted on a globe, many of the world’s most important ancient sites are found to line up in a nearly perfect circle. (Marco Di Lauro/Getty Images)
Beyond Science

Easter Island, the Egyptian pyramids, Peru’s Nazca lines, the temples of Angkor Wat… Imagine a curious cartographic lineation connecting several important sites of the ancient world.  In fact, when key locations are charted on a globe, a nearly perfect circle emerges, suggesting a mystery as yet unresolved through archeological inquiry.

An astounding list of the planet’s culturally precious places can be found on this mysterious ring as it passes through small islands, several continents, and even proposed locations of mythical sites.

In Africa, this line traverses the Sahara desert’s Tassili Plateau, the pyramids of Egypt, and over to key points along the Tigris, Euphrates, and Nile rivers—arguably three of some of the most influential courses of water in the ancient world. Trace this arc further and you’ll come to the ancient Persian capital of Persepolis, the ancient city of Mohenjo-Daro, the oracle of Ammon at the oasis of Siwa, and the lost city of Petra—one of the seven new Wonders of the Ancient World.

Further along this path you’ll find the ancient Sumerian city of Ur, the temples of Angkor in Cambodia and Thailand, the Dead Sea, the Himalayas, the Qiangtang River in China, and the remains that some catalog as the mythical Atlantis. Astoundingly, this mysterious line connects these sites within a margin of error of less than one tenth of one degree of latitude, with the center of this circle found in southeastern Alaska.

So what does this circle tell us? Many say these connections suggest that the ancients possessed an understanding far greater than widely held contemporary beliefs afford our ancestors. Others point out that as the circle’s center is found in Alaska, its alignment might describe where the earth’s poles may have been located before they shifted to their present location. Aside from the theories and conjecture, one common thread among many of these sites is the high degree of craftsmanship the structures there portray. Several sites along this circle exemplify an advanced technology that modern researchers remain unable to explain.

The Egyptian pyramids, the city of Petra, the fortress of Ollantaytambo, and others on this circle represent feats of engineering that continue to astound and inspire humankind. The same effect can be found at Nazca. This ancient village continues to baffle investigators as to how and why pre-Columbian natives made over 300 enormous geoglyphs on the Peruvian soil. Like the great connecting circle itself, the representations of apes, birds, spiders, and other animals found in the famous Nazca lines can only be revealed at a considerable distance above the earth. Without modern flying machines, what purpose or method would these ancient people have in charting such enormous designs?

In the 1920s, amateur antiquarian Alfred Watkins observed that sacred sites in England fell on a series of interconnected straight paths, which he termed “ley lines.” When charted on a map, these stone circles, monuments, and ancient settlement sites neatly line up throughout the country. The observation has prompted some to believe that these lines represent a system of geomancy that the ancients followed when determining the placement of various structures. Much like the acupuncture meridians used in Chinese medicine, people who study these ley lines insist that the earth also has its own meridian system.

If the ancients did use such a system for placement, how did they determine where the lines fell? Furthermore, is the location of the sites found within this great circle likewise due to the influence of this mysterious geomancy, but on a larger scale? Since the sites involve several cultures that are not known to have had any contact, one has to consider if they were merely responding to a system that is currently beyond modern understanding.