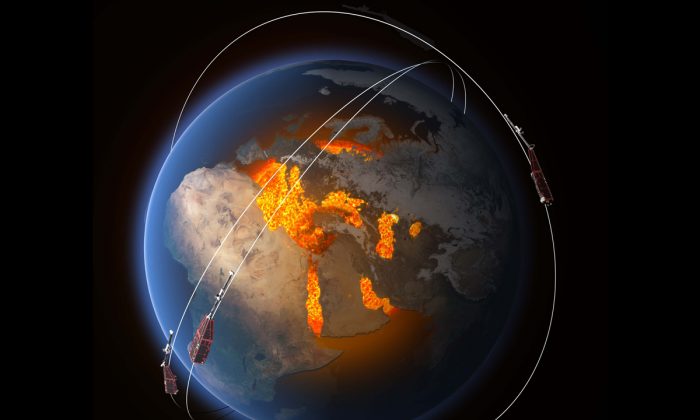 The Earth’s magnetic field is weakening between Africa and South America, causing problems for spacecraft and satellites, scientists with the European Space Agency (ESA) have said.

Researchers noted that there is an anomaly in the South Atlantic that has grown in recent years. Data from the ESA’s Swarm constellation of satellites showed that the magnetic field’s strength in the area dropped by 8 percent between 1970 and 2020.

Meanwhile, the weakness in the field has moved to the west at a pace of around 12 miles per year, according to scientists.

“The new, eastern minimum of the South Atlantic Anomaly has appeared over the last decade and in recent years is developing vigorously,” said Jürgen Matzka, from the German Research Centre for Geosciences, in an ESA news release.

He added, “We are very lucky to have the Swarm satellites in orbit to investigate the development of the South Atlantic Anomaly. The challenge now is to understand the processes in Earth’s core driving these changes.”

One possibility for the shift, according to the ESA, is that it’s a sign the Earth’s magnetic field is about to reverse, meaning that the North Pole and South Pole may switch places.

The last time this phenomenon took place was approximately 700,000 years ago, and such events usually take place every 250,000 years.

An event of such magnitude could have serious repercussions as magnetic fields play a role in protecting Earth from cosmic radiation and solar winds.

Satellite and telecommunication systems also use the Earth’s magnetic field to operate, meaning that a shift could trigger devastating problems to worldwide communication.

What’s more, the agency said that spacecrafts and satellites flying in the area could suffer “technical malfunctions.”

However, a report in the “Proceedings of the National Academy of Sciences” in 2018 found that weakening does not suggest that the Earth’s magnetic field is reversing, saying that the process would take thousands of years.

The ESA stated that it would continue to monitor the weakening magnetic field with its Swarm satellites.

“The mystery of the origin of the South Atlantic Anomaly has yet to be solved,” the news release said. “However, one thing is certain: magnetic field observations from Swarm are providing exciting new insights into the scarcely understood processes of Earth’s interior.”