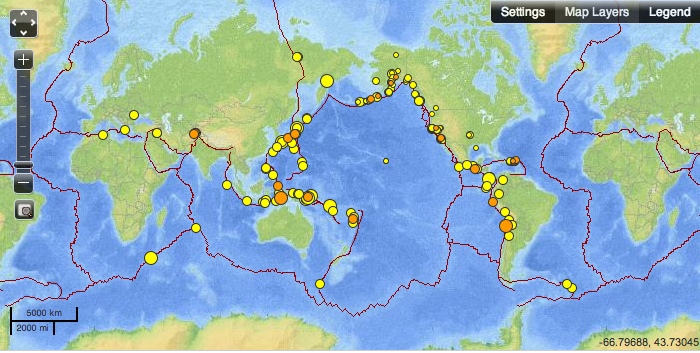 A Map by the United States Geological Survey shows earthquakes that have occurred since Mar. 11. Millions of small earthquakes over hundreds of thousands of years could cause the creation of gold deposits according to a new study. (Screenshot by the Epoch Times)
Science

Earthquakes Turn Water to Gold But Don’t Hold Your Breath

Earthquakes turn water to gold over hundreds of thousands of years according to a new study by Nature Geoscience.

Earthquakes turn water to gold according to a study released by the Journal of Nature Geoscience March 17. The study puts forward a new theory on the formation of gold deposits that may change the way we mine for gold.

When an earthquake hits, the movement travels outward along cracks in the earth, called fault lines. The shifts can cause the instant vaporization of any groundwater that was flowing through the fault lines.  Groundwater often carries tiny amounts of gold and other minerals in suspension.

The Nature Geoscience study suggests that when the water vaporizes the minerals crystallize.   Over hundreds of thousands of years, and a million little earthquakes later, the mineral deposits build up to substantial, minable deposits.

This study may mean that mining companies will focus their exploration in areas with frequent seismic activity.

“This new knowledge on gold-deposit formation mechanisms may assist future gold exploration efforts,” said Dion Weatherley, a geophysicist at the University of Queensland in Australia and lead author of the study, according to LiveScience.com.

There are other geological events that also cause gold formation, such as volcanic activity.