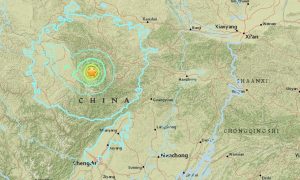 Rescue workers search for trapped people at a collapsed building after an earthquake in Shuanghe Town in Changning County of Yibin City, southwest China's Sichuan Province on June 18, 2019, a day after a strong earthquake hit the area. (Zeng Lang/Xinhua via AP)
Social Issues

BEIJING—Rescue efforts were underway on June 18 after an earthquake in southwestern China left at least 12 people dead and 135 others injured, authorities said.

State broadcaster CCTV showed soldiers using a chainsaw to cut through a wooden door and rescue a couple under a fallen kitchen wall.

More than 4,400 people have been evacuated after 73 houses collapsed, authorities said.

Most of the deaths were caused by damage to houses, the official Xinhua News Agency said.

A major highway and sections of other roads were closed, Xinhua said. CCTV showed a landslide down a hill and onto a road.

The hardest-hit area appeared to be Changning County, part of Yibin City. CCTV reported that a hospital in Changning transferred all of its patients because of building damage.