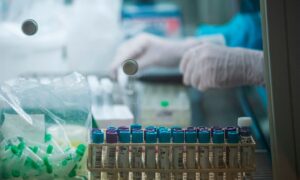 Earthquakes in San Bernardino Might Be Due to ‘Deep Creep’ in San Jacinto Fault: Study

New research has suggested there is an unusual reason behind small earthquakes around San Bernardino’s basin in California.

The study, published in Geophysical Research Letters, examined the deformation patterns of thousands of quakes below the San Andreas and San Jacinto faults, primarily centered in San Bernardino.

The quakes, according to the survey, have vertical movement, whereas most earthquakes in the region have horizontal slipping.

“Over the past 36 years, seismic stations have recorded the style of deformation from thousands of small earthquakes in the San Bernardino basin, California,” said the authors in an abstract of the study.

“Within this basin, many earthquakes below 10 km (6 miles) depth show deformation that does not match what we expect for this region during the current period between large damaging earthquakes along the San Jacinto and San Andreas faults,” they added.

The researchers then used models to show that the vertical movement can be produced in the basin of the northern part of the San Jacinto fault, adding that it is moving backward rather than staying locked like the San Andreas fault, which runs roughly north-south along the state of California.

They added that scientists generally use GPS to look at the creep in faults, but it didn’t work in this case because the San Andreas and San Jacinto faults are too close together.

“The findings of this study demonstrate that small earthquakes that occur adjacent to and between faults can have very different style of deformation than the large ground rupturing earthquakes produced along active faults. This means that scientists should not use the information recorded by these small earthquakes in the San Bernardino basin to predict loading of the nearby San Andreas and San Jacinto faults,” the authors wrote.

This research was funded by the Southern California Earthquake Center, which in turn is funded by cooperative agreements with the National Science Foundation as well as the U.S. Geological Survey, which records earthquakes around the world, Science Daily reported.

One-third of the small quakes in the region are of the “deep creep” style, said Cooke.

“These little earthquakes are a really rich data set to work with, and going forward if we pay more attention than we have in the past to the details they are telling us, we can learn more about active fault behavior that will help us better understand the loading [the buildup of seismic pressure] that leads up to large damaging earthquakes,” said Cooke in a statement, according to Gizmodo.

Geosciences professor Michele Cooke, who helped author the study, wrote: “Our earthquake catalog is growing every year; we can see smaller and smaller ones every year, so we thought why not take advantage of the networks we’ve built and we can look at them in more detail.”

The study comes as a 3.4-magnitude earthquake hit San Bernardino on Sept. 20, and it was noted by a number of people on social media. There were no reports of damage or injuries. The quake hit at around 5:44 a.m. local time about 2 miles north of Colton, said the USGS.