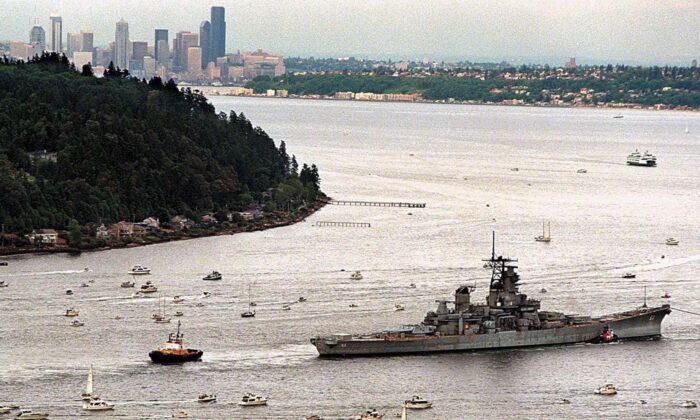 The USS Missouri is towed around the southern tip of Bainbridge Island, Wash., on May 23, 1998. (Greg Gilbert/The Seattle Times/TNS)
Science News

By Nicholas Turner
From The Seattle Times

SEATTLE—A tsunami triggered by a major earthquake beneath Puget Sound would arrive at the shores sooner and reach further inland than previously understood, according to a study published Thursday by the Washington Department of Natural Resources.

Models showed a tsunami following a magnitude 7.5 quake would inundate Seattle’s shoreline under more than 20 feet of water, and reach parts of Bainbridge Island, Elliott Bay and Alki Point within three minutes.

Waves could reach a staggering 42 feet at the Seattle Great Wheel and reach as far as Lumen Field and T-Mobile Park.

“Three to five minutes is all that separates a seismic event from the arrival of tsunami waves,” said public lands commissioner Hilary Franz on Thursday during a press conference on the Seattle waterfront. “Which is why we do this research now so everyone is aware of it, so our local state government is aware of it, and we can start to prepare and plan and take all precautions necessary.”

The new study used newer data on topography and elevation, spanning a larger area, than did previous studies of the Seattle, Tacoma, and Everett areas published in 2003, 2009 and 2014 respectively.

While Tacoma is projected to see less water inundation than in previous studies, the new report said waves could travel further inland.

Water along parts of the northeast coast of Harbor Island could rise 15 feet, the study showed, while waves could reach up to half a mile inland from Smith Cove to Sodo, and closer to a mile near the Port of Tacoma.

North of Deception Pass, the waves grow smaller, to a projected average height of five feet.

Franz urged residents to learn more about the risks facing their area, sign up for earthquake and tsunami warnings, and to prepare an emergency kit with at least two weeks of water, food, and other necessities—and to do all of that now, before it’s too late.

“We will not be able to design away all of the risks stemming from earthquakes and tsunamis, but we can take this new modeling to help us develop plans ensuring our resiliency when it happens,” she said.

In the study, researchers from the department’s Washington Geological Survey division used projections modeled after the last major earthquake under the Seattle fault—a magnitude 7.5 that occurred about 11,000 years ago—to estimate the height, arrival time, and inland reach of a subsequent tsunami if, or when, the disaster repeats itself.

Research shows the fault has triggered smaller quakes, mostly around 6.5 magnitude, five times in the past 3,500 years.

While it’s likely future earthquakes will be smaller than what was modeled, the projections were still “shocking,” said Alex Dolcimascolo of the geological survey division, an author of the report. “We really wanted to emphasize this scenario so people can prepare.”