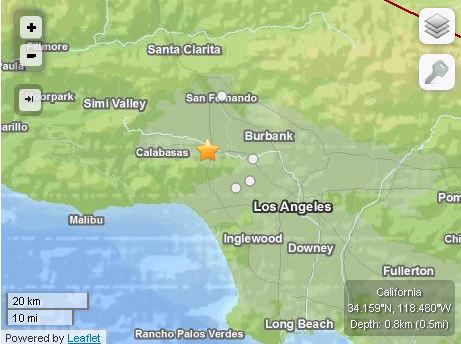 Earthquake Today Near Universal City, Beverly Hills, and West Hollywood Outside of LA

The quake was termed a “micro earthquake” by the U.S. Geological Service.

It hit at a very shallow depth of 0.5 miles.

The cities are all just outside of Los Angeles.

Some residents said that they didn’t feel the quake.

“Without Twitter I wouldn’t have known there was an earthquake,” said Anne of San Fernando Valley on Twitter.

But others were disturbed by the shaking.

“I’m really scared because I just started visualizing what would happen if an earthquake happened at that moment then it actually happened,” Sasha Kassab said, also via Twitter.

‘I’m afraid there’s gonna be like a 7.5 earthquake,” said another local.

The quake follows a series of quakes that have hit in or off the coast of California the past two weeks.