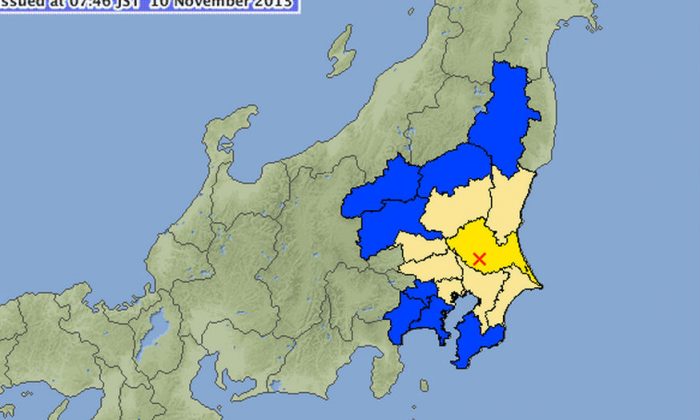 A screenshot of the Japan Meteorological Agency website shows where the quake hit.
Asia & Pacific

An earthquake struck near Tokyo on Sunday morning. Preliminary reports today said that the quake was a magnitude-5.8, while the U.S. Geological survey said it was a 5.5.

Reuters reported that some buildings shook in Tokyo.

And a NHK announcer said that there is a possibility of water, gas, and power outages due to the quake.

On Twitter, a number of users commented that they felt the quake.

“Was half-awake in bed in Tokyo when a 5.6 earthquake said, “Get up already!” wrote CNBC reporter Tim Hornyak on Twitter.

Another wrote: “Had my first earthquake whilst in Japan. Pretty cool :3 .”

Said another: “Day one in Japan and I get another shaker… 35th floor is probably not the place to be. Good times!”

According to the U.S. Geological Survey, the quake hit around 25 miles northeast of Tokyo, one mile from Moriya, four miles from Mitsukaido, six miles from Abiko, and six miles from Toride.

Locals said that the quake lasted around 30 seconds.