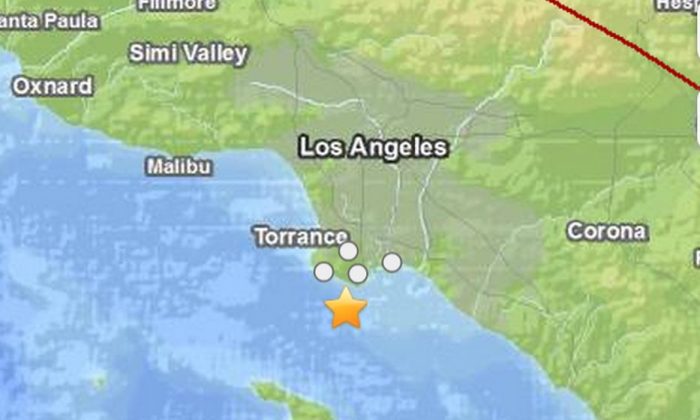 An earthquake hit near LA on Sunday night.
US

The USGS said the quake hit at around 8 p.m. local time.

It’s unclear if any damage was done.

The magnitude-6.0 quake, centered near the city of Napa, an oasis of Victorian-era buildings nestled in the vineyard-studded hills of northern California, ruptured water mains and gas lines, hampering firefighters’ efforts to extinguish the blazes that broke out after the temblor struck at 3:20 a.m.

Dazed residents who had run out of their homes in the dark and were too fearful of aftershocks to go back to bed wandered through Napa’s historic downtown, where boulder-sized chunks of rubble and broken glass littered the streets. Dozens of homes and buildings across the Napa Valley were left unsafe to occupy, including an old county courthouse, where a 10-foot wide hole opened a view of the offices inside.

College student Eduardo Rivera said the home he shares with six relatives shook so violently that he kept getting knocked back into his bed as he tried to flee.

“When I woke up, my mom was screaming, and the sound from the earthquake was greater than my mom’s screams,” the 20-year-old Rivera said.

Gov. Jerry Brown declared a state of emergency for southern Napa County, directing state agencies to respond with equipment and personnel. President Barack Obama was briefed on the earthquake, the White House said, and federal officials were in touch with state and local emergency responders.

The temblor struck about six miles south of Napa and lasted 10 to 20 seconds, according to the United States Geological Survey. It was the largest to shake the San Francisco Bay Area since the magnitude-6.9 Loma Prieta quake struck in 1989, collapsing part of the Bay Bridge roadway and killing more than 60 people, most when an Oakland freeway collapsed.

Queen of the Valley Medical Center in Napa, where an outdoor triage tent was set up to handle the influx, reported treating 172 people in the emergency room, although hospital officials could not say how many of them were there for bruises and cuts suffered in the quake and how many for more routine injuries and illnesses.