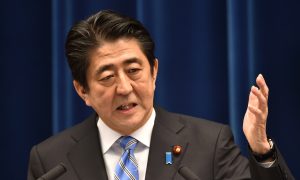 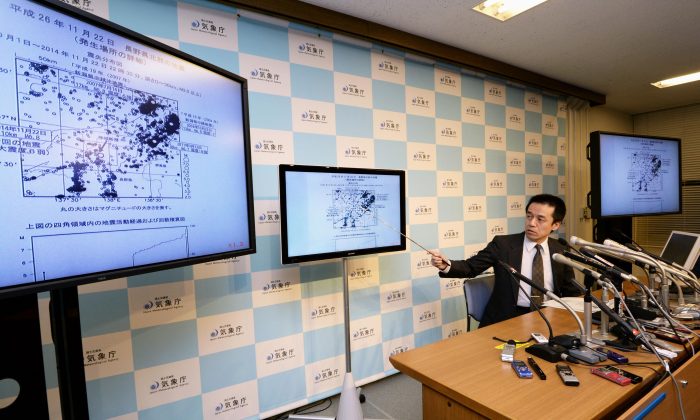 TOKYO—A strong earthquake in the mountainous area of central Japan that hosted the 1998 Winter Olympics destroyed more than half a dozen homes in a ski resort town and injured at least 30 people, officials said.

The magnitude-6.8 earthquake struck Saturday near Nagano city shortly after 10 p.m. (1300 GMT) at a depth of 10 kilometers (6 miles), the Japan Meteorological Agency said. The U.S. Geological Survey measured the quake’s magnitude at 6.2. Since the quake occurred inland, there was no possibility of a tsunami.

Ryo Nishino, a restaurant owner in Hakuba, a ski town west of Nagano, told Japanese broadcaster NHK that he had “never experienced a quake that shook so hard. The sideways shaking was enormous.” He said he was in the restaurant’s wine cellar when the quake struck, and that nothing broke there.

Japan’s Nuclear Regulation Authority said no abnormalities were reported at three nuclear power plants in the affected areas. All of Japan’s nuclear plants are offline following a magnitude-9.0 earthquake and massive tsunami in 2011 that sent three reactors at the Fukushima Dai-ichi plant into meltdown. Fukushima is about 250 kilometers (155 miles) northeast of where Saturday’s earthquake occurred.

“We are trying to assess the situation as quickly as possible, and we’ll do our utmost for the rescue of the injured people,” Japan’s top government spokesman, Yoshihide Suga, told reporters.

One of the hardest-hit areas appeared to be Hakuba, which hosted events in the 1998 games. At least seven homes collapsed, and other buildings were also severely damaged, local and national disaster agencies said. Seventeen people were injured.

The National Police Agency told Japan’s Kyodo news agency that 21 people were trapped underneath the collapsed houses, but they all were rescued, with two of them injured.

Many houses also lost water, apparently because of a ruptured pipe, and landslides on two major roads blocked access to some areas. “We are afraid there could be some areas that may have been isolated, so we need to conduct a thorough assessment of damage after sunrise,” said Shigeharu Fujimura, a Nagano prefecture disaster management official

The earthquake was felt across much of northern Japan and in Tokyo, about 200 kilometers (125 miles) southeast of Hakuba.

Kyodo said all Shinkansen bullet trains in the region were temporarily suspended. The quake caused scattered blackouts, including about 1,600 homes in Hakuba and Omachi city, the Chubu Electric Power Co. told Kyodo.

The quake was followed by 21 aftershocks, said Yohei Hasegawa of the Meteorological Agency’s earthquake and tsunami division. He warned of further aftershocks and urged residents to watch out for landslides. The area was struck by a magnitude-6.7 earthquake the day after the massive March 2011 quake.