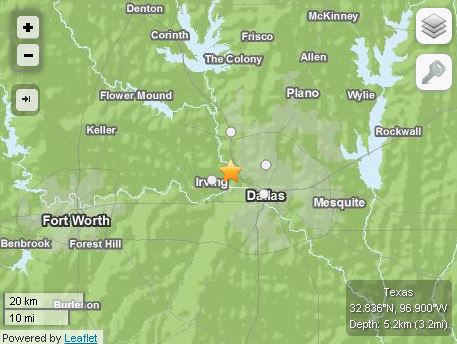 A earthquake struck today near Dallas, though many who felt it believed it was actually in Dallas.

The epicenter was pegged six miles west-northwest of Dallas by the U.S. Geological Survey.

The quake registered as 3.5 magnitude, at a relatively shallow depth of 3.2 miles.

Meteorologist Jeff Jamison of CBS noted that it’s the strong quake in the area since a 3.6 magnitude quake hit the Azle area in 2013.

There have now been 16 quakes centered near the Irving area since November 21, 2014.

This latest quake happened at about 3:10 p.m. local time.

People took to Twitter to say they had felt it.

“We just had an earthquake! In Dallas! I swear, there’s been more seismic activity here than there’s been in L.A. for some time,” said one user.

“Hold on….did I just experience an earthquake in Dallas? Did any one felt that? I’m a little worried here…. hmmmm….,” said another user–the Dallas Mavericks’ forward Charlie Villanueva.

The USGS noted that quakes are infrequent east of the Rocky Mountains.

“Earthquakes east of the Rocky Mountains, although less frequent than in the West, are typically felt over a much broader region than earthquakes of similar magnitude in the west. East of the Rockies, an earthquake can be felt over an area more than ten times larger than a similar magnitude earthquake on the west coast. It would not be unusual for a magnitude 4.0 earthquake in eastern or central North America to be felt by a significant percentage of the population in many communities more than 100 km (60 mi) from its source,” it said.

“Most earthquakes in North America east of the Rockies occur as faulting within bedrock, usually miles deep. Few earthquakes east of the Rockies, however, have been definitely linked to mapped geologic faults, in contrast to the situation at plate boundaries such as California’s San Andreas fault system, where scientists can commonly use geologic evidence to identify a fault that has produced a large earthquake and that is likely to produce large future earthquakes.”