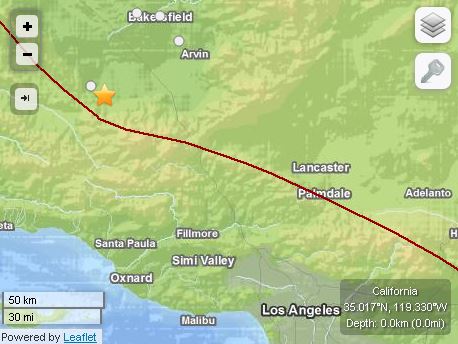 Earthquake Today in California: Quake Hits Near Maricopa, Bakersfield Outside of Los Angeles

An earthquake hit today in California near Maricopa.

It was also about 40 miles northwest of the outer Los Angeles area.

The quake hit at at ground level, somehow, according to the U.S. Geological Service.

See another story about California via AP below.

SAN MARINO, Calif.—The doo-doo has gotten too deep for the mayor of a wealthy Los Angeles suburb who flung dog poop onto a political opponent’s property.

Kneier remains on the City Council. Councilman Eugene Sun will serve as mayor.

Kneier found the bag of dog waste June 7 and tossed it onto the walkway of political opponent Philip Lao.

Lao recognized the mayor on surveillance video and called police. Video of the incident went viral.

In his resignation letter, Kneier says his actions were inconsiderate and disrespectful and he’s stepping down because the event continues to be embarrassing to him and to the city.