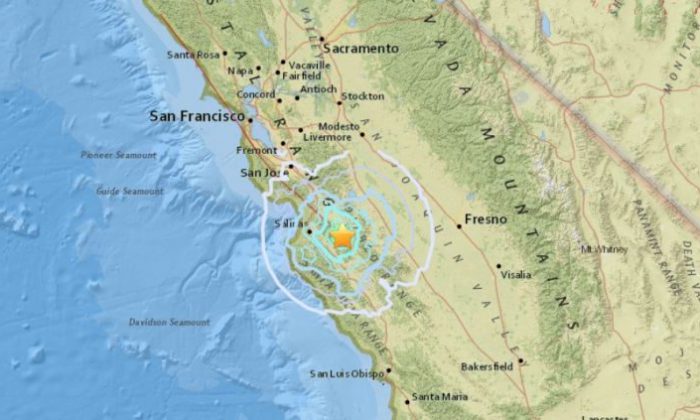 An earthquake swarm was reported in Northern California in Monterey County on Monday, Nov. 14, centered around the famed San Andreas Fault.

The largest, according to the U.S. Geological Survey,  was a 4.6-magnitude quake that was felt a hundred miles away.

The swarm struck Monday at 11:31 a.m. ET about 13 miles (20 km) northeast of Gonzales, near Salinas. The initial 4.6-magnitude quake was followed up by nine aftershocks, the USGS said.

The largest of these measured 2.8, Annemarie Baltay, a seismologist with the USGS in Menlo Park, California, told the San Francisco Chronicle.

There were no reports of injuries or damage done to structures.

Previously, experts have warned that activity on the San Andreas fault line is a cause for concern.

“Any time there is significant seismic activity in the vicinity of the San Andreas fault, we seismologists get nervous,” Thomas Jordan, the director of the Southern California Earthquake Center, told the Los Angeles Times last year. “Because we recognize that the probability of having a large earthquake goes up.”

Baltay, however, said that the recent quakes are “really typical behavior.”

In 2014, it was reported that many buildings in California were unequipped to deal with large earthquakes.

“Modern building codes are actually very good for earthquake resistance. The problem is older buildings that were built prior to the existing codes,” said Robert Graves, the Southern California coordinator for the U.S. Geological Survey’s (USGS) Earthquake Hazards Program, in 2014.

A few months ago, there was speculation that if a major quake were to hit California, it could affect thousands of people.

A quake on the scale of what Mexico experienced in September could wreak huge havoc on the state.

The damage would be worse than what was seen in Mexico, scientists say, because Mexico’s quake occurred far away from populated areas, while a quake in southern California would run along a fault line directly underneath residential neighborhoods like the Palm Springs, San Bernardino Valley, and the San Gabriel Mountains north of Los Angeles.

Most of the population in Mexico was “a pretty long way away from [the earthquake],” seismologist Lucy Jones told the Los Angeles Times on Friday.

In California, “we’d have a lot of people right on top of it. It would be shallow, and it runs through our backyard,” Jones added.