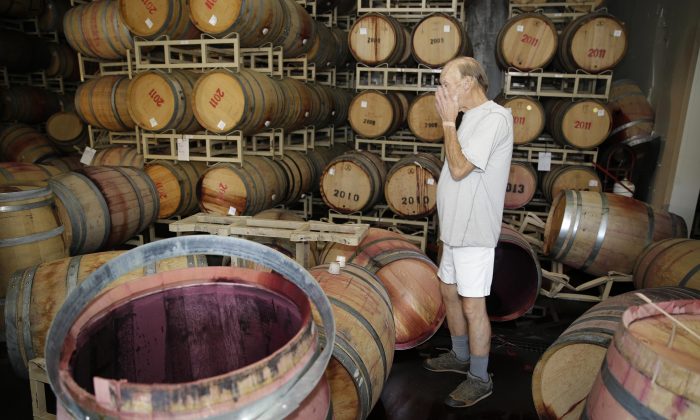 Winemakers in California’s renowned Napa Valley have spent the past two days cleaning up thousands of broken bottles and assessing the damage from Sunday magnitude-6.0 earthquake. The region’s worst quake in 25 years caused damage to homes, businesses, and roads, but damage to the region’s wine industry is coming into view more slowly.

The earthquake’s epicenter was only six miles southwest of Napa, California, the center of California’s winemaking region.

B.R. Cohn lost “as much as 50 percent” of its wine, Montgomery said. The winery focuses on high-end, single estate wines that retail between $40 and $100 a bottle.

At Dahl Vineyards in Yountville, California, the earthquake broke 37 bottles of wine, shook wine tanks off of their footings, broke glasses and decanters, and shook a $16,000 barrel of Pinot Noir off its rack. The destroyed barrel sent every other barrel to their tipping points. The owners were working to save the rest, removing the barrels with a forklift.

Despite the losses, the winery posted an upbeat message on their Facebook page on Monday.

“Everyone at Dahl Vineyards is OK and we really want to thank you all for your prayers and well wishes,” the message said. “All in all we weathered this earthquake and everything is fine.”

Wineries farther away from the earthquake’s epicenter, such as Silver Oak Winery, reported more modest damage. They lost “a couple hundred bottles” of wine, said Ian Leggat, a spokesman for Silver Oak, as well as three barrels full of wine. Most of the product damaged at Silver Oak was single-vineyard wines the winery uses for testing. None of the wines sold to consumers were damaged in the quake, Leggat said. Neither the winery’s Silver Oak nor Twomey wineries sustained any structural damage, according to the company.

The wine in barrels not damaged by the quake may have problems, however, because wines aging in barrels are supposed to be kept as still as possible, Montgomery said.

Napa is California’s best-known winemaking region and a favorite regional tourism destination. Although it produces only 4 percent of California’s total wine crop, wines from Napa are world-renowned and sell for top dollar. The Napa Valley region has a $50 billion impact on the economy every year, about a quarter of wine industry for the entire U.S., according to Napa Valley Vinters (NVV).

The majority of Napa’s wineries are among the NVV’s 500 members, and are 95 percent family owned. They are currently in the midst of harvesting season, which runs from roughly August through mid to late October. There was no damage to the vineyards and grapes, according to the organization. Some winemakers were reporting modest damage to equipment, which could affect harvesting.

Although the U.S. Geological Survey has estimated that the damage from the quake to be about $1 billion, the specific loss to wineries will take a little longer to assess.

“It will be several days before we have an understanding of the economic impact,” said Patsy McGaughy, communications director for NVV, on Monday. She said that at least half a dozen of their members had damage to things like inventory, barrel storage, and wine production, but the vast majority are doing well and running operations as normal.

Significant damage is likely and the disaster is potentially widespread. Estimated economic losses are less than 1% of GDP of the United States. Past events with this alert level have required a regional or national level response. (Source: earthquake.usgs.gov)

The most severe damage was in Napa or nearby, said McGaughy. Though she didn’t name any specific wineries, she did say that the vintages of 2012 and 2013 were “two of the most abundant ever,” which could offset other losses.

The earthquake adds to what has already been a difficult year for California winemakers. California is in the middle of its worst drought in decades.

Otherwise, the Napa Valley Chamber of Commerce said on Sunday that most businesses were open as usual.