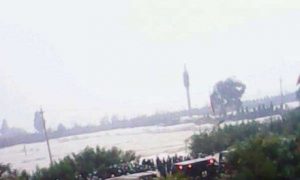 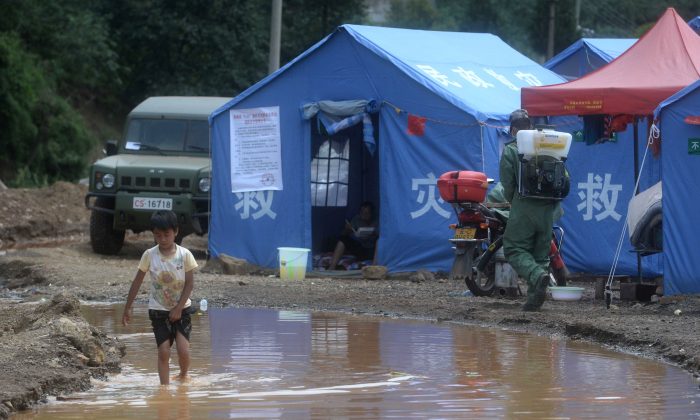 A boy (L) walking through water at a temporary shelter in Longtoushan Township in southwest China's Yunnan province, on Aug. 7, 2014. Local officials are taking advantage of the disaster to gain wealth by selling donated bottled water and food to victims. (AFP/Getty Images)
China

The official death toll of the 6.5-magnitude earthquake that hit southwestern China’s Yunnan Province on Aug. 3 has reached 617. While local disaster victims have been in urgent need of food, water, and living supplies, local officials have taken advantage of the disaster to enrich themselves, according to the Chinese-language service of Radio Free Asia (RFA) on Monday.

A local resident, Mr. Li, in Longtoushan Township of Yunnan, said a bottle of water costs 10 yuan ($1.62), a package of instant noodles is also 10 yuan, and a jacket is two yuan, the report said.

Those donated relief supplies all should have been distributed to local victims for free. Instead, the prices charged for water and food are higher than the market prices in China.

Mr. Li also indicated that some residents who have a close relationship with the local officials were able to receive more relief supplies than others, even though some of the residents didn’t suffer from the earthquake.

Meanwhile, scam text messages requesting donations have also been rampant in China after the earthquake, with many pretending to be charity organizations, and some pretending to be individual victims, according to the Chinese press.

Many Chinese netizens reported losing trust even in authorized charity organizations due to the widespread corruption and embezzlement that has been reported.

In 2011, a 20 year-old young woman, Guo Meimei, posed online as a senior manager at the China Red Cross and showed off her lavish lifestyle, hinting at embezzling people’s donations to the charity. Guo was recently arrested and confessed on national Chinese Central Television, apologizing for gambling, prostitution, and all her mistakes.

“Yunnan had an earthquake, but I won’t donate money… because the most problematic organizations in China are the governmental organizations that are best at collecting wealth.” Netizen M_wuyang remarked on Weibo, a twitter-like platform in China.