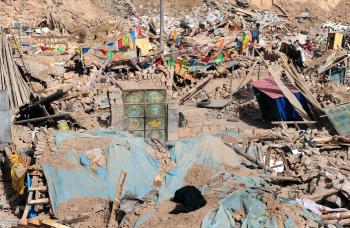 Two Chinese seismologists had predicted an earthquake in the Tibetan Autonomous Region and had reported their predictions to the China Earthquake Administration (CEA). Though these seismologists’ predictions were accurate, they were not used to reduce losses from the disaster.

Yu Xianghong, a seismologist from Shaanxi Earthquake Administration’s Houma station, told The Epoch Times that he sent a brief on short-term earthquake prediction to the CEA on April 13. He also sent a text message to the China Earthquake Networks Center and received a confirmation receipt. He predicted an earthquake would occur near Yushu, Qinghai Province between April 14 and 17 at a magnitude of 5.0 to 5.5.

Zhang Deliang, an earthquake forecaster from Dancheng County, Henan Province, submitted a written report to the CEA in early March predicting a quake in Chaya County, quite close to Yushu and in the same seismic region. Zhang is well-known for correctly predicting the 2008 Wenchuan earthquake four months ahead of its occurrence and the 2010 Yunnan Province earthquake one month in advance. His current prediction was accurate within 2 hours and 10 minutes, with the epicenter within 124 miles and the magnitude differing by 0.7.

Zhang sent his report by express mail to the CEA, the Tibet Earthquake Administration, the Tibetan government, and other related offices. He is unaware if there was any response.

According to a Beijing Times report on March 9, seismologists from the CEA issued a statement: “Since 2010, the global earthquake frequency is indeed higher than average, but for the time being it is still difficult to say the earth has entered a high-frequency period of strong earthquakes. Judging from the current situation, more strong earthquakes will still happen, but mostly in the Pacific Rim. Devastating earthquakes will not happen in China in the near future."

In their interviews with The Epoch Times, Yu Xianghong and Zhang Deliang said they felt both distressed and helpless. Yu said, “According to regulations, earthquake predictions can only be announced by the government and earthquake administrations, and no individual or institutions are allowed to publicize predictions on their own.”

“We have always hoped that the tragedy of the Wenchuan earthquake (7.9 magnitude on May 12, 2008) would not be repeated, but sadly such tragedies recurred,” Zhang said, adding that he even wrote to Hu Jintao and Wen Jiabao with his predictions.

The two seismologists refuted the authorities’ claim that earthquakes are unpredictable. Zhang said that they follow natural rules and are definitely predictable. “If we have the necessary research facilities and collaborations, the accuracy of earthquake predictions can reach 98 percent and above, and we can also contribute to the exploration of seismic energy,” he said.

Yu Xianghong, who centers his work on imminent earthquake forecasting, supported his view. “We are working to forecast earthquakes three to four days ahead of their occurrence,” he explained. “It is even harder than long-term prediction, but more practical.”

He said that they are dealing with limited resources as well as equipment which has not been installed according to standards. This has created a great deal of interference and slowed their progress. With better resources and collaboration, he feels there would be no problem to accurately predict earthquakes. “I tried to get information from other earthquake monitoring stations, and I also applied to the higher authorities. My efforts were fruitless,” he said.