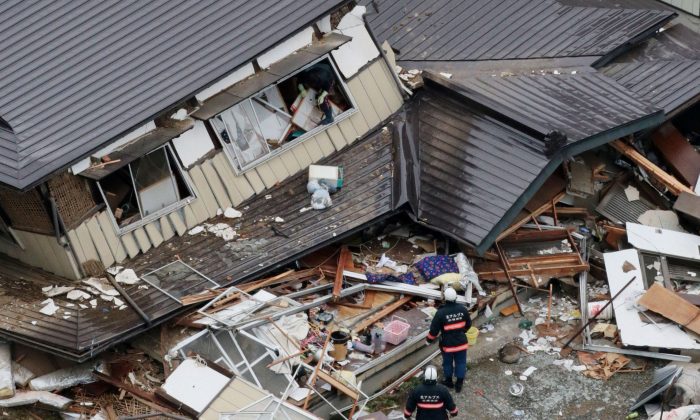 TOKYO—Helicopter surveys on Sunday showed more extensive damage than earlier thought from an overnight earthquake in the mountainous area of central Japan that hosted the 1998 Winter Olympics.

At least 37 homes were destroyed in two villages, and 39 people were injured across the region, including seven seriously, mostly with broken bones, officials said.

The magnitude-6.7 earthquake struck shortly after 10 p.m. Saturday west of Nagano city at a depth of 10 kilometers (6 miles), the Japan Meteorological Agency said. The agency revised the magnitude from a preliminary 6.8 while the U.S. Geological Survey measured it at 6.2. Since the quake occurred inland, there was no possibility of a tsunami.

Ryo Nishino, a restaurant owner in Hakuba, a ski resort village west of Nagano, told Japanese broadcaster NHK that he had “never experienced a quake that shook so hard. The sideways shaking was enormous.” He said he was in the restaurant’s wine cellar when the quake struck, and that nothing broke there.

Japan’s Nuclear Regulation Authority said no abnormalities were reported at three nuclear power plants in the affected areas. All of Japan’s nuclear plants are offline following a magnitude-9.0 earthquake and massive tsunami in 2011 that sent three reactors at the Fukushima Dai-ichi plant into meltdown. Fukushima is about 250 kilometers (155 miles) northeast of where Saturday’s earthquake occurred.

The hardest-hit area appeared to be Hakuba, which hosted events in the 1998 games. At least 30 homes were destroyed, and 17 people injured, the Nagano prefecture government said. Another seven homes were lost in Otari, a nearby village to the north. Non-residential buildings were also destroyed, with officials still assessing the extent.

Japanese television footage showed buildings in various states of collapse, some flattened and others leaning to one side, and deep cracks in the roads. A landslide spilled onto a railroad track, forcing service to stop. About 200 people have evacuated to shelters, almost all from Hakuba and Otari.

Shigeharu Fujimori, a Nagano prefecture disaster management official, said it was fortunate there haven’t been any deaths reported despite the extent of the damage.

All 21 people trapped under collapsed houses were rescued, with two of them injured, the National Police Agency told Japan’s Kyodo news agency. Japanese television showed police going house to house Sunday morning, calling out to make sure that inhabitants were accounted for.

“The hardest-hit area was in the mountains and sparsely populated, where neighbors have a close relationship and help each other,” Fujimori said. “So I don’t think anyone has been forgotten or left isolated.”

Shinkansen bullet train service in the region was restored after a short interruption. Chubu Electric Power Co. said 200 homes were still without power on Sunday.

The quake was followed by more than 45 aftershocks, and Meteorological Agency official Yohei Hasegawa urged residents to watch out for landslides. The area was struck by a magnitude-6.7 earthquake the day after the huge March 2011 quake.