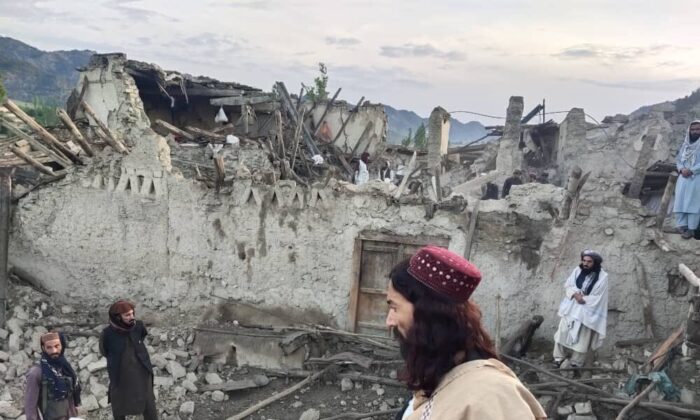 Afghans look at destruction caused by an earthquake in the province of Paktika, eastern Afghanistan, on June 22, 2022. (Bakhtar News Agency via AP)
Afghanistan

An earthquake in eastern Afghanistan early on June 22 left at least 1,000 people dead and at least that many injured, with tremors felt in neighboring Pakistan and India, officials said.

“Unfortunately, last night, there was a severe earthquake in four districts of Paktika province, which killed and injured hundreds of our countrymen and destroyed dozens of houses,” government spokesperson Bilal Karimi wrote in a June 22 Twitter post. “We urge all aid agencies to send teams to the area immediately to prevent further catastrophe.”

More than 1,000 people died in the Gayan and Barmal districts of Paktika province alone, the head of the province’s Information and Culture Department told Bakhtar News Agency. In addition, more than 1,500 have been injured, the agency wrote on Twitter.

“The death toll is expected to increase as an investigation in affected areas is still ongoing,” the agency stated. Some villages are located in remote mountainous regions,  meaning that more time is needed to collect full details of the situation, Interior Ministry official Salahuddin Ayubi told Reuters.

The epicenter of the 6.1 magnitude earthquake was located around 31 miles from the city of Khost. The quake began shortly after 1:30 a.m. local time, when most people were asleep in their homes.

In most places around the world, an earthquake of that magnitude wouldn’t cause extensive damage, Robert Sanders, a seismologist with the U.S. Geological Survey, told The Associated Press. But because the quake happened in a mountainous area where falling rocks and landslides can be an issue, a true picture of the devastation wouldn’t be known “until later reporting,” he said.

In addition, older buildings are “likely to crumble and fail.”

Images circulating on the internet showed destroyed houses and landslides. Dozens of people are believed to be trapped under the rubble. Footage from the affected regions showed victims being airlifted and carried away in helicopters.

Tremors from the earthquake were felt in Pakistan’s capital city of Islamabad. However, no casualties have been reported there and the damage has mostly been minimal, according to BBC Urdu.

While rescuers have rushed to the affected area with helicopters, the response will likely face challenges, since many international agencies have left Afghanistan since the Taliban takeover.

“@OCHAAfg and @unafghanistan are assessing the needs and responding in the aftermath of the earthquake last night which has taken hundreds of lives. Our condolences to the families of deceased, response is on its way,” Alakbarov wrote in a Twitter post.

Afghanistan is prone to earthquakes since it’s located in a tectonically active region, with several fault lines such as the Central Badakhshan, Hari Rud, Darvaz, and Chaman faults.

An average of 560 deaths are registered in Afghanistan every year from earthquakes. According to the U.N.’s Office for the Coordination of Humanitarian Affairs, earthquakes have killed more than 7,000 people there in the past decade.