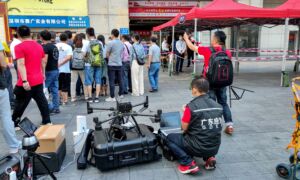 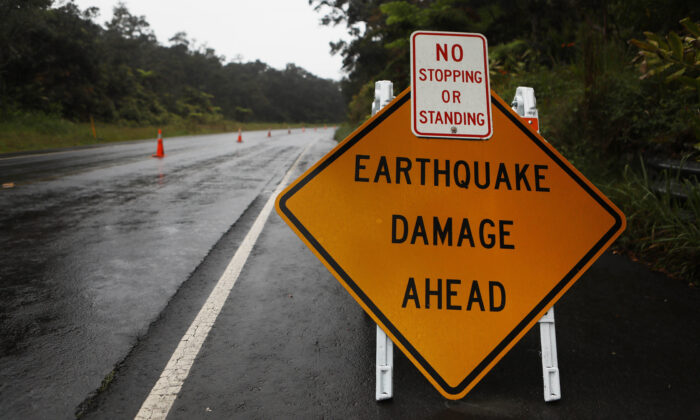 A sign is posted warning of earthquake damage to the road from seismic activity at the Kilauea volcano on Hawaii's Big Island on May 17, 2018 in Hawaii Volcanoes National Park, Hawaii. (Mario Tama/Getty Images)
US News

HONOLULU—An earthquake at an active deep sea volcano off Hawaii shook the Big Island but didn’t appear to have any impact on other nearby volcanoes and no significant damage was reported.

The U.S. Geological Survey’s Hawaiian Volcano Observatory said the magnitude-4.0 quake Wednesday night was located under Loihi seamount, about 20 miles southwest of the Island of Hawaii, also known as the Big Island. It occurred at a depth of 7 miles.

USGS officials said moderate shaking could be felt across the Big Island but at that intensity no significant damage was expected. The earthquake did not generate a tsunami and it had no apparent effect on nearby Kilauea or Mauna Loa volcanoes.

“We see no detectable changes in activity at the summits or along the rift zones of Loihi, Kilauea or Mauna Loa as a result of this earthquake,” said Ken Hon, head scientist at the USGS’s Hawaiian Volcano Observatory. “Aftershocks are possible and could be felt.”

Kilauea is among the world’s most active volcanoes and Mauna Loa is the largest volcano on Earth. Both are located on the Big Island.

Loihi is an active volcano with a summit about 3,200 feet below the surface of the Pacific. The summit area has three craters and scientists believe it has a shallow magma chamber just beneath the surface.

An eruption of the rarely visited volcano has never been observed, but researchers believe Loihi has explosive and effusive eruptive events.

Earthquakes have been recorded at Loihi for decades. In the summer of 1996, there were more than 4,000 earthquakes at the seamount, 300 of which were larger than magnitude-3.0 and 95 larger than 4.0.

Last year, USGS reported more than 100 earthquakes at Loihi in the middle of May. The earthquake activity could have represented a brief eruption or the movement of magma inside the volcano, officials said.

There are no monitoring instruments on the deep-water volcano and measurements are taken from stations on the Big Island.

Loihi is likely to one day break the surface of the ocean and become a new island. Scientists cannot predict how long that would take because it depends on the rate of eruption, but they say it could happen in about 200,000 years.

Seamounts are either active or dormant volcanoes that rise from the bottom of the ocean. They are hotspots for marine life because they carry nutrient-rich water upward from the sea floor.

Seamounts are believed to cover about 18 million square miles of the planet.