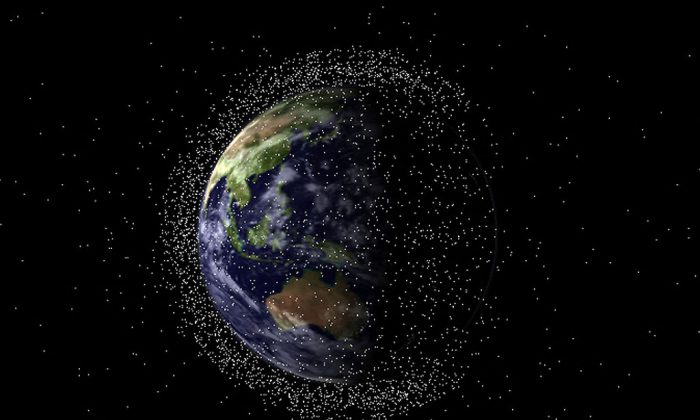 Plenty of space junk out there. (EOS Space Systems)
Science

Earthbound and Down: Bright Meteor Seen in Australian Sky Was Space Junk

A bright meteor lit up the sky across Australia on the night of July 10, grabbing the attention of anyone who happened to be outdoors.

Seen around 10pm AEST, it was intensely bright and slow moving, with many observers having the time to capture footage and photograph the phenomena.

It was obviously no normal meteor. What witnesses saw was space junk.

It was the spent rocket from a Russian spacecraft that had launched early Wednesday morning (AEST) from Baikonur Cosmodrome in Kazakhstan. The rocket had successfully deployed a Russian weather satellite, along with six smaller satellites, into Earth orbit.

Having done its job, the third stage of the Soyuz rocket re-entered Earth’s atmosphere above Australia from 9:45pm AEST, July10.

Measuring 7m long and weighing three tonnes, the cylindrical object likely disintegrated above western NSW. Residents of the town of Cobar reported hearing a sonic boom, five minutes after first seeing the meteor, signally its demise within that region.

Plenty of Space Junk Out There

The amount of material that is now orbiting our Earth is mind-boggling. Since 1957, when the Russians launched the world’s first satellite Sputnik, around 2,500 satellites have followed it into space.

This includes household names such as the Hubble Space Telescope, the International Space Station (ISS) and the satellites responsible for the global positioning system GPS. But satellites themselves are not the real problem.

Floating up there above Earth are 20,000 objects larger than a tennis ball and, in fact, NASA tracks more than 500,000 objects right down to the size of a marble.

NASA estimates that on average one piece of space junk returns to Earth each day. Last night, it was Australia’s time to see that in action.

Unsurprisingly, space junk is now becoming a serious problem, especially as our use of satellite technology shows no sign of abating. Space may be big, but it’s getting crowded up there and if nothing is done, one day there won’t be room to send up any more satellites.

Plans are underway to determine how the world will clean up this mess.

Earlier this year the Australian government launched a A$20 million Space Environment Management Cooperative Research Centre to be established at Mt Stromlo Observatory, Canberra, to help deal with space junk.

Partners include the Australian National University, RMIT University, and EOS Space Systems based at Mt Stromlo.

The concern is how to clean up space to avoid the serious risk of space collisions, as were played out so vividly in the Oscar-winning movie Gravity.

The centre is looking to use high powered lasers to find and track space junk. But ultimately, it is investigating the possibility of using the lasers to zap space debris and have it safely de-orbit and burn up harmlessly in Earth’s atmosphere.

Sometime in the future, we may well be seeing many more displays of streaking lights across the sky.

Tanya Hill does not work for, consult to, own shares in or receive funding from any company or organisation that would benefit from this article, and has no relevant affiliations. This article was originally published on The Conversation. Read the original article.