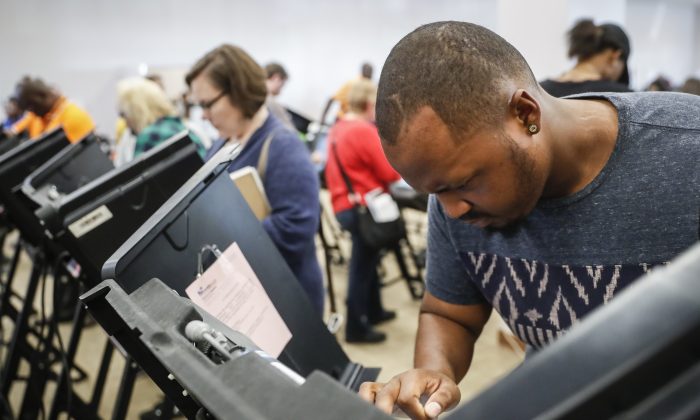 Elijah Ransom of Columbus, Ohio, votes early at the Franklin County Board of Elections, in Columbus, OH., on Nov. 7, 2016. (AP Photo/John Minchillo)
US

Early Voting: Record Levels in 2016 May Give Clinton Edge

WASHINGTON—A record number of Americans have voted ahead of Election Day, driven by soaring turnout from Latino voters. That could be good news for Hillary Clinton.

At least 43.2 million people have cast ballots by early voting—by mail or at polling stations, according to Associated Press data. Record levels have been reported in 23 states and the District of Columbia. Millions more ballots are still coming in.

The AP estimates that early votes could top 50 million. That comes to nearly 40 percent of all ballots in a presidential election expected to have high turnout overall due to intense public interest. In 2012, there were 46 million early votes, or 35 percent.

“Interest in early voting has been unprecedented in many states,” said Michael McDonald, a University of Florida professor and expert on voter turnout who is a consultant to AP.

The latest numbers show declines in voting from blacks in North Carolina—a drop-off after historic levels for Barack Obama in 2008 and 2012. But higher turnout by Latinos, who often lean Democratic, may be buoying Clinton in Florida. Both are must-win states for Donald Trump.

The Hispanic vote is also surging in Nevada and Colorado, where Democrats are running near or above their successful 2012 pace. Trump could be holding an edge in Ohio and Iowa, but that won’t be enough if Latinos drive Clinton to victories in other battleground states.

A look at early voting trends:

In Florida, a record 6.4 million early ballots are already in, or more than three-fourths of the expected vote. Democrats are ahead, 39.9 percent to 38.5 percent. Democrats had slightly wider margins in 2008 and 2012. Obama narrowly won the state both years.

While the black share of the vote is lower, ballots from Hispanics have nearly doubled to more than 976,000. Roughly one-third of those did not vote in 2012, according to an analysis by Daniel Smith, a University of Florida professor. That could help Clinton. Democrats are seeking to draw in new and sporadic voters to boost overall turnout.

In North Carolina, more than two-thirds of the expected votes have been cast. Democrats lead in ballots submitted, 42 percent to 32 percent. Democrats were apparently hampered by fewer polling locations in the first week of early voting. After more locations opened, the party made up ground, but black turnout remains lower by nearly 65,000, or 8.6 percent.

Republicans are running ahead of their 2012 pace, when Mitt Romney narrowly won the state.

Scott Tranter, co-founder of the Republican data firm Optimus, said the outcome may hinge on unaffiliated voters and ticket-splitters. “It’s unclear whether Trump can consolidate 90 percent of the Republican Party,” he said.

Latinos may be boosting Clinton in the West.

In Nevada, more than three-fourths of the likely vote has been cast. Democrats lead, 42 percent to 36 percent.

That pace is largely comparable to 2012, when Obama won by 6 percentage points. Latino and Asian-American turnout are up by double-digits while black participation is down slightly. The white share of the vote is down, from 77 percent to 75 percent.

In Colorado, the two parties are virtually tied at 35 percent. More than 70 percent of the ballots are in. At this point in 2012, Republicans held an advantage.

Clinton also appears to be holding ground in other states won by Obama, but targeted by Trump.

In Virginia, early voting has surpassed 2012 levels, lifted by higher turnout in Democratic-leaning northern counties. The state does not provide breakdowns by party.

Turnout is also outpacing 2012 levels in Wisconsin, with bigger shares coming from Democratic counties such as Dane and Milwaukee.

Trump may hold a slight edge in Iowa and Ohio.

In Iowa, Democrats currently lead in early ballots, 42 percent to 35 percent. That is a narrower gap than in 2012. Republicans are matching 2012 levels while Democrats are running below. Obama won the state by 5 percentage points.

Ohio does not provide breakdowns by party. But voter modeling for the AP by Catalist, a Democratic analytical firm, shows that black turnout continues to lag 2012 levels. African-Americans make up about 9 percent of the vote share, compared to 12 percent in 2012. Ballots from whites have risen.

In Georgia, where early voting has already exceeded 2012 levels, turnout is up across racial groups. But ballots from whites have risen more. In all, blacks made up about 30 percent of early votes compared to 36 percent in 2012. White ballots rose from 63 percent to 66 percent.

In Utah, Trump may be holding ground despite a challenge from third-party candidate Evan McMullin.

Republicans lead in returned ballots, 49 percent to 13 percent for Democrats; no-party voters make up 34 percent. The Republican share is down from 2012 but has been improving, according to Catalist.

HOW MUCH WILL LATINOS BOOST CLINTON?

In Arizona, with more than two-thirds of the expected total votes cast, Republicans lead in balloting, 40 percent to 34 percent. That is a narrower gap compared to 2012, when the GOP led by roughly 10 percentage points.

At least 4.5 million votes have been cast in Texas’ top 15 counties, up 32 percent. The state does not provide party breakdowns, but voter modeling by Catalist found sharper rates of increases among Latinos.