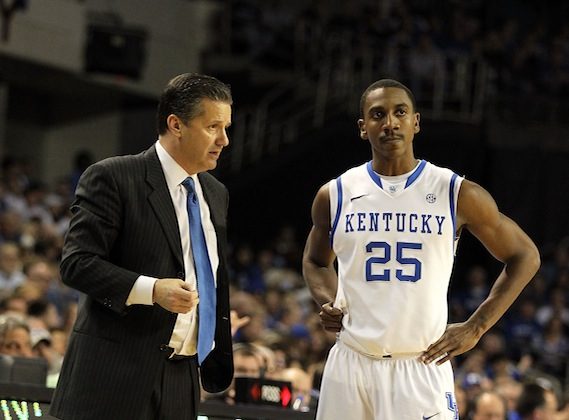 Though there are still a few recruiting battles for a couple of the nation’s top high-school players, most have declared their intentions. In addition most current college players have announced whether they are going to the NBA. With that in mind here is an early guess at the top teams next season:

1. Indiana, 27–9 last season: With the return of freshman forward Cody Zeller (15.6 points, 6.6 rebounds per game) the Hoosiers will dodge the early entry bullet that will end several teams’ (namely Kentucky and North Carolina) chances at being the favorites next season. Add to that a top-10 incoming class and Indiana becomes the team to beat.

2. Duke, 27–7 last season: The Blue Devils will lose Austin Rivers to the draft, but return seniors Mason Plumlee (11.1 points, 9.2 rebounds), Ryan Kelly (11.8 points), and Seth Curry (13.2 points). Combined with the bad taste left in their mouths by their shocking first-round exit, should make this team one of the best next season.

4. Louisville, 30–10 last season: The Cardinals finished 2012 strong with a Final Four appearance that showed off several good players who will return next season. Sophomore center Gorgui Dieng (9.1 points, 9.1 rebounds, 3.2 blocks) is an excellent anchor on defense while freshman forward Chane Behanan (9.5 points, 7.5 rebounds) and junior point guard Peyton Siva (5.6 assists) should round out a balanced team.

5. Florida, 26–11 last season: The Gators were a bit of an enigma last season, but ended with an impressive run to the Elite Eight. If freshman guard Bradley Beal (14.8 points, 6.7 rebounds) returns for his sophomore season, as fellow guard Kenny Boynton (15.9 points) is doing, coach Billy Donovan should have a consistently good team.

6. Texas, 20–14 last season: The Longhorns rebounded from a slow start to finish sixth in the Big 12. They lost leading scorer J’Covan Brown to the draft. The entire freshman class is returning and they have a top-five recruiting class coming in.

7. Baylor, 30–8 last season: Baylor is a bit of an enigma. Coach Scott Drew has convinced a number of talented players to join his once-dormant program over the years, though the team hasn’t made it to the top of its conference let alone a Final Four. Even though Perry Jones is leaving for the draft, Drew has assembled another top-five class that could put Baylor over the top.

8. Kentucky, 38–2 last season: Kentucky’s 2012-2013 projection is probably the toughest on the list. Though no one has officially declared for the NBA from the team, chances are Anthony Davis, Michael Kidd-Gilchrist, and Terrence Jones will be gone and there may be more. In addition, John Calipari is in the running for commitments from two of the top high school seniors who should announce their intentions any day now.

9. Michigan State, 29–8 last season: The Spartans will lose All-American forward Draymond Green but will return their second leading scorer in sophomore guard Keith Appling (11.2 points) and add a top-10 recruiting class that will keep them in the hunt for the Big Ten title.