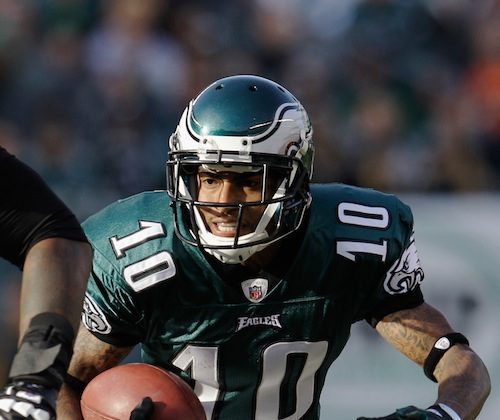 Jackson’s 4,096 receiving yards are more than any Eagle has had through his first four seasons in Philadelphia. (Rob Carr/Getty Images)
NFL

The Philadelphia Eagles today announced on their website they have signed wide receiver DeSean Jackson to a five-year contract that runs through the 2016 season. Jackson had been designated the team’s franchise player earlier this month.

“We are thrilled to be able to keep one of the NFL’s top playmakers in Philadelphia,” said Eagles head coach Andy Reid. “DeSean is a game breaker, he has the speed and ability to score from anywhere on the field, and he has proven himself to be a big threat for our offense.”

The deal is worth a reported $48.5 million according to a report on the NFL’s website.

The 25-year-old Jackson was a second-round pick for the Eagles in 2008. The two-time Pro Bowler caught 58 passes for 961 yards last year and has recorded at least 900 yards in each of his four seasons in the NFL.