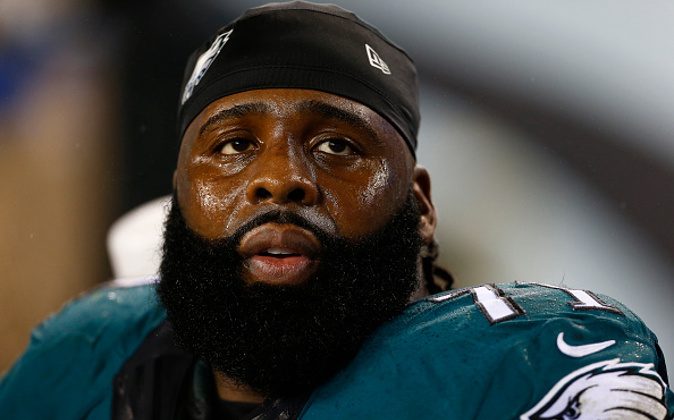 PHILADELPHIA, PA - DECEMBER 26: Jason Peters #71 of the Philadelphia Eagles looks on during the closing moments of a game against the Washington Redskins at Lincoln Financial Field on December 26, 2015 in Philadelphia, Pennsylvania. The Redskins defeated the Eagles 38-24. (Photo by Rich Schultz /Getty Images)
NFL

Jason Peters Benches Himself in 4th Quarter of Loss to Redskins

In the 4th quarter of the Philadelphia Eagles’ 24-38 loss to the Washington Redskins on Saturday, Fox 29 Philly’s Howard Eskin reported that LT Jason Peters pulled himself out of the game.

Why? “I’m not going to get hurt for this,” he reportedly said.

It wasn’t a decision issued by the Eagles coaching staff, according to local reports.

There have been various opinions on the matter since the news broke.

The majority holds that Peters’ actions show a lack of respect to teammates, coaches, and the game. Hence, some even suggest that he should be booted from the team.

Others find the comment almost tongue-in-cheek and humorous in a way. In a unsightly game marred by numerous errors on the offensive end (a microcosm of the season, some Eagles fans say), some players would rather call it a day.

According to Les Bowen of the Philadelphia Daily News, it was a pragmatic decision: Peters simply didn’t want to risk injury for a team not going to the playoffs.

In any case, it was not a good performance for Peters either, who was beat all game by Redskins rookie linebacker Preston Smith.

The 33-year-old Peters made his eighth Pro-Bowl earlier this week, and he has been a bright spot on a struggling Eagles’ offense.