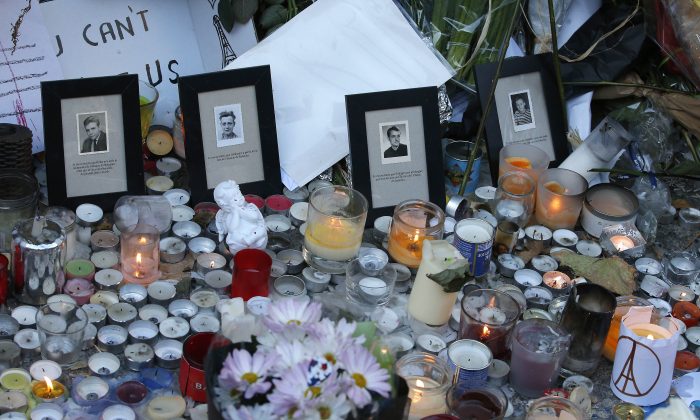 Pictures of victims are placed behind candles outside the Bataclan concert hall in Paris, Sunday, Nov. 15, 2015. (AP Photo/Christoph Ena)
Europe

Eagles of Death Metal Singer: A Kid Survived Paris Attacks by ‘Hiding under my leather jacket’

Jesse Hughes, the lead singer of the Eagles of Death Metal, the band that was playing the Paris venue that turned into a deadly hostage situation last week when terrorists opened fire, gave a detailed account of what happened.

Hughes said the Islamic State (ISIS) terrorists killed fans hiding inside the band’s dressing room in the Bataclan theater on the night of Nov. 13. At least 130 people died in a series of attacks carried out across Paris, with a good number of deaths occurring at the Bataclan.

In an emotional interview with Vice, the 43-year-old singer said that one person in the room survived by hiding under his leather jacket.

Vice released a short clip of the interview, which was released by its founder Shane Smith. Hughes. It also shows the band’s co-founder, Josh Homme, who is also the frontman for Queens of the Stone Age.

“Several people hid in our dressing room and the killers were able to get in and killed every one of them, except for a kid who was hiding under my leather jacket,” Huges said. “People were playing dead and they were so scared – a great reason so many were killed was because so many people wouldn’t leave their friends. So many people put themselves in front of people.”

At least six terrorist suspects were arrested during the police operation around the Grande Place in Brussels, according to the Derniere Heure publication.

It’s unclear if Europe’s most wanted man, Salah Abdeslam, was arrested in the sting. Salah has been on the run after French police issued an international arrest warrant.

Belgium extended the terror alert to Monday, Nov. 23. Schools in Brussels will remain closed on Monday.

Belgian Prime Minister Charles Michel said the threat of an attack like in Paris last week is high.

He said, “We have taken several new measures to protect public transports. There will be an increased police and military presence which can be heightened if needed,” according to Britain’s Telegraph newspaper.

“The metro will remain closed until tomorrow. Schools in Brussels will be closed in Brussels tomorrow. We will make an evaluation again tomorrow and the national security council will meet again to discuss it.

“This is a difficult situation for everyone. We thank everyone for their commitment under these difficult circumstances. Our objective is to return to life as normal as quickly possible.

“There are several investigations underway.”