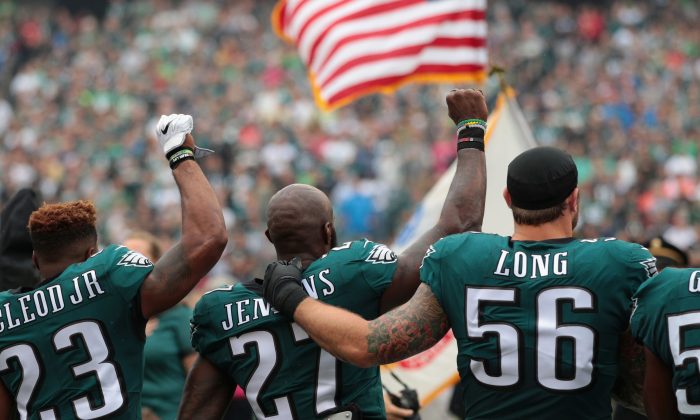 Before just about every game, Philadelphia Eagles safety Malcolm Jenkins has raised his fist in the air during the national anthem, courting controversy. But that’s now about to change.

This week, Jenkins told media outlets that he would end his practice of raising his right fist after the NFL agreed to provide at least $89 million to “social justice” programs at the behest of the Players Coalition founded by Jenkins.

“The purpose was to draw awareness to the issues that plague people of color, and the disenfranchisement of our communities, police brutality, the gap in our education system, the way our criminal justice system devours black-bodies,” Jenkins said Friday, NJ Advance Media reported. “That’s what I wanted to draw awareness to. I’ve been actively working to improve in those areas nationally, and in my own community.”

Some players, including San Francisco safety Eric Reid and Chargers tackle Russell Okung, have withdrawn from Jenkins’ Players Coalition, saying they won’t end their anthem protest. Reid and Okung stated that Jenkins doesn’t speak for them.

“Malcolm did text me this morning asking if we would be comfortable ending our demonstrations if the NFL made a donation,” Reid said Wednesday, according to NBC News. “At that point, that was the last straw for me. He had a conversation with the NFL. We agreed that multiple people would be part of the conversations with the league so it just wouldn’t be him. He didn’t stand by his word on that. At no point did we ever communicate an agreement with the NFL to end the protest.”

“The NFL continues a disingenuous approach to player grievances, refusing to match the urgency of this movement. Their proposal is woefully inadequate… Don’t believe the hype. I encourage players to continue to exercise their constitutional rights,” he tweeted.

“I think what is a disservice is that my name gets thrown around in talks about the coalition like I’m the only player involved,” Jenkins said in response, according to the Philly Inquirer. “I think it’s a discredit to all the guys who have put in time and effort and work into this.”

“It’s all personal,” Jenkins said of his anthem protest, according to NJ Advance. “Nothing that we’ve done with the league mandates anyone to stand or end their demonstrations. This is a personal decision, solely on me. I do think that the goal was to come up with something that guys feel comfortable moving on from the protests. Nothing mandates anything.”

The NFL sent out a statement saying the social justice initiative “will supplement, not replace” other charitable efforts.

The league sent out a memo to all 32 teams on Friday, saying it would work with players, teams, and groups.

“Social justice may mean different things to different people and organizations,” Anna Isaacson, the NFL’s senior vice president of social responsibility, wrote. “The NFL’s work will encompass programs and initiatives that reduce barriers to opportunity, with a priority on supporting improvements in education, community/police relations and our criminal justice system. Additional focus areas include poverty, racial equality and workforce development.”