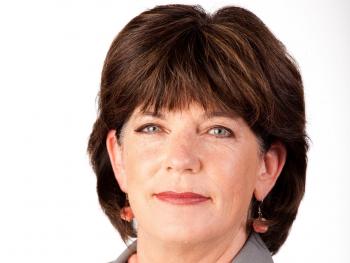 Auckland Deputy Mayor Penny Hulse said her impression of Falun Gong is of a gentle and peace-loving and respectable community. (Auckland City Council)
US

Diane Cordemans
View profile
Follow
biggersmaller
Print
AUCKLAND, New Zealand— An e-mail sent to  councillors was meant to turn them against the spiritual practice of Falun Gong (also known as Falun Dafa). Instead, it has succeeded in annoying the recipients, who considered the e-mail to be a malicious hoax.

The e-mail claimed to be from a Falun Gong practitioner and discussed in an offensive manner the Christchurch earthquake, in which 159 people are known to have died. Among other things, the e-mail said those who died got what they deserved. It was sent on Feb. 25 to councillors from several cities.

Dr. Cathy Casey, one of Auckland's councillors, called this e-mail "shocking" and "reprehensible."

Sam Fang, president of the Falun Dafa Association, said, “The author of the e-mail is using the tragedy of the Christchurch earthquake as an opportunity to turn New Zealanders against the Falun Gong community.”

Falun Gong is a traditional Chinese qigong practice that involves doing meditative exercises and living according to the principles of truthfulness, compassion, and tolerance.

Mr. Fang linked the e-mail to the campaign being waged by the Chinese regime against Falun Gong. “The e-mail is clearly designed to discredit Falun Gong, something which the Chinese Communist Party has also continually sought to do as part of its twelve-year persecution of Falun Gong practitioners in China,” he said.

In July 1999, the Chinese regime’s then-paramount leader Jiang Zemin, scared by the popularity of Falun Gong in China, ordered that the practice be “eradicated.”

This is the second e-mail sent to officials this year slandering Falun Gong.

The first e-mail was sent in January to members of parliament and councillors and carried the letterhead of the Chinese Consulate. It slandered Falun Gong and suggested that people should not attend the Shen Yun Performing Arts show, scheduled to perform in Auckland in February.

The New York-based Shen Yun performs classical Chinese dance and music in order to revive the spirit of traditional Chinese culture, according to the Shen Yun website. The Falun Dafa Association of New Zealand was a sponsor of the show.

The January e-mail backfired, as officials condemned the Chinese Consulate for having sent it.

This second e-mail also appears to have backfired, as several very puzzled Auckland councillors have realized that it was not authentic.

“The people who practice Falun Gong, to the best of my knowledge, are peace-loving people,” said Dr. Casey.

“The purpose [of the e-mail] was to bring Falun Gong into disrepute, and I can assure you that that hasn't happened as far as Auckland councillors are concerned,” she said.

Auckland Deputy Mayor Penny Hulse has the same impression as Dr. Casey. Ms. Hulse said that everyone she had spoken to “immediately realized that it [the e-mail] was something that wasn't legitimate.”

Ms. Hulse said her impression of Falun Gong is of a gentle and peace-loving and respectable community. “I could not imagine one of them could send an e-mail like that.”

Councillors in other cities also expressed their disbelief and concern when they received the e-mail.

Julie Calnan of Rotorua District Council said, “I was indeed surprised and very disturbed by the content of the e-mail, but it is reassuring to read that these [referring to the e-mail] are not Falun Gong principles.”

Mr. Fang has sent an e-mail to the councillors and members of parliament stating categorically that the person who wrote the e-mail was not a Falun Gong practitioner. It is utterly disgraceful and shameful that this person has sought to exploit the tragedy and suffering of the people of Christchurch said Mr Fang. "Falun Gong practitioners are equally saddened by the pain that Christchurch people are experiencing.”