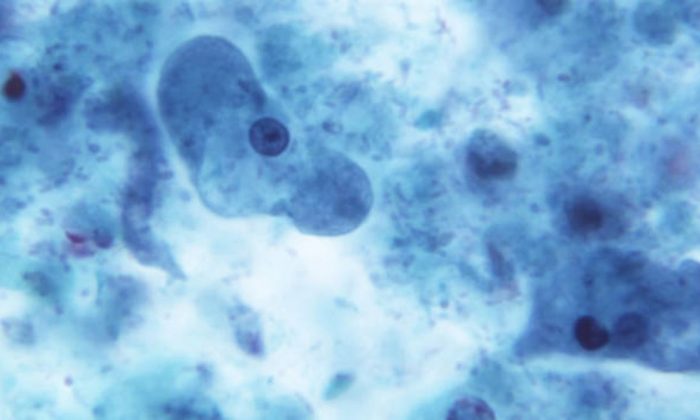 E. coli under a microscope (CDC)
US News

Most of the cases have been on the west coast in Washington state, Oregon, or California, but people reported getting ill in Ohio, Mississippi, and Alaska as well. [delete]

The infected people became sick between Nov. 27 and Dec. 9, range in age from 4 to 79, and are primarily female.

The true number of sick people is likely higher because many people recover without medical care and are not tested for E. coli, a bacteria that has harmless and harmful strains.

The Centers for Disease Control and Prevention (CDC) says people should not consume packaged power greens or organic power green with “best if used by” dates through Dec. 20.

Officials said none of the items that are believed to be contaminated are still on the market.

People usually get sick from E. coli two to eight days after exposure.

Americans should contact their health providers if they experience any of the symptoms.

“E. coli O157:H7 can cause serious illness,” Dr. Scott Lindquist, Washington state’s epidemiologist for communicable diseases, said in a statement. “If you notice symptoms, especially bloody diarrhea, contact your health care provider right away. Even if you ate some of the product and did not get sick, throw the rest away.”

In addition, people who had the products in question should wash any items and surfaces that may have touched them.

Kroger and Nature’s Basket did not respond to requests for comment.

Investigators are still probing the matter to determine if any other products may contain E. coli.