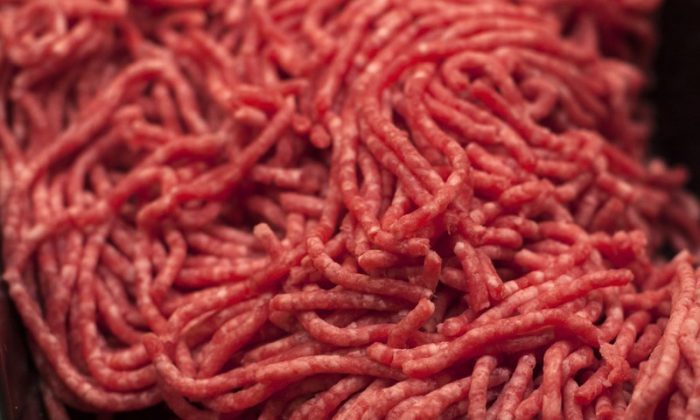 Ground beef is displayed for sale at a market in Washington state on April 1, 2017. (J. Scott Applewhite/AP Photo)
US News

Ground beef is the food responsible for a mystery E. coli outbreak involving 109 cases of illness in six states, according to preliminary evidence, the US Centers for Disease Control and Prevention said on April 12.

“Ill people in this outbreak report eating ground beef at home and in restaurants,” the CDC said in its outbreak update.

No single supplier, distributor or brand has been identified as the source of the outbreak. Therefore, no recall has been issued, and the CDC is not recommending that consumers avoid ground beef at this time or that restaurants stop serving it.

That’s one more state and 13 more illnesses since the previous update reported by the CDC on Tuesday.

As part of the investigation, 75 of those reporting illnesses have been interviewed by health investigators. Eighty-four of them reported eating ground beef in the week before their symptoms began, according to the CDC.

Symptoms include severe stomach cramps, diarrhea and vomiting. They begin, on average, three to four days after ingesting the bacteria. Most people recover in five to seven days. The first reported symptoms from this outbreak began March 2.

Seventeen patients have been hospitalized due to their illness.

Federal, state and local health officials are continuing to investigate.

In the meantime, the CDC reminds consumers to prevent E. coli by washing hands, cooking ground beef to an internal temperature of 160 degrees, as measured with a meat thermometer, and keeping foods that aren’t cooked away from raw beef to prevent cross-contamination.

E. coli are a diverse family of bacteria that can be found in the environment, in foods and in the intestines of people and animals. Most strains are harmless. To avoid becoming infected with a harmful strain, the CDC recommends using proper hygiene; cooking meat at proper temperatures; avoiding raw milk, unpasteurized dairy products, and juices; and not swallowing water when swimming.

Most people infected by the bacteria get better within five to seven days. Antibiotics are not recommended for patients with suspected E. coli infections until testing has been performed.

How to Prevent E. Coli Infection

The Centers for Disease Control and Prevention has suggested ways to prevent the spread of E. coli:

(1/2) KY continues to experience an E. Coli outbreak. Ways that you can prevent infection include: Washing hands frequently for at least 20 seconds with soap and warm water. Wash hands before eating, after going to the bathroom, handling raw meat and eggs, and pic.twitter.com/VZj1Qx6vnu