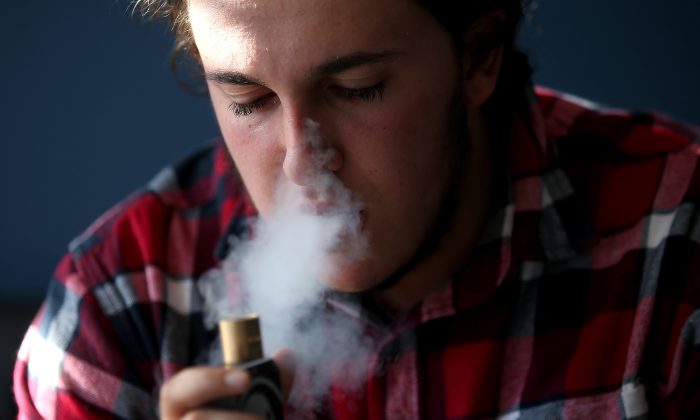 A man smokes an e-cigarette in San Rafael, Calif., on Jan. 28, 2015. A study with mice found that e-cigarette vapor made them more susceptible to respiratory infections. (Justin Sullivan/Getty Images)
News

E-Cigarettes May Open Lungs to the Flu

A study with mice suggests vapor from e-cigarettes can compromise the immune system in the lungs, leaving them more vulnerable to potentially dangerous infections like pneumonia and the flu. E-cigarettes also generate some of the dangerous “free radicals” found in traditional tobacco cigarettes, the study shows.

“Our findings suggest that e-cigarettes are not neutral in terms of the effects on the lungs,” says senior author Shyam Biswal, professor of environmental health sciences at Johns Hopkins University Bloomberg School of Public Health.

“We have observed that they increase the susceptibility to respiratory infections in the mouse models. This warrants further study in susceptible individuals, such as COPD [chronic obstructive pulmonary disease] patients who have switched from cigarettes to e-cigarettes.”

E-cigarettes are emerging as a public health concern as “vaping” gains popularity among current and former smokers and those who have never smoked, including teens. The perception that e-cigarettes pose little health risk causes some smokers, even some with COPD, to switch to e-cigarettes.

In the study, published online in the journal PLOS ONE, Biswal and colleagues exposed mice to e-cigarette vapor for two weeks in amounts that approximated actual human e-cigarette inhalation. Other mice were exposed only to normal air.

The researchers then divided each set of mice into three subgroups. One received nasal drops containing Streptococcus pneumoniae, bacteria responsible for human pneumonia and sinusitis, among other illnesses. The second received drops of the virus Influenza A. The third subgroup received neither.

Mice exposed to e-cigarette vapor were significantly more likely to develop compromised immune responses to both the virus and the bacteria, which in some cases killed the mice.

“E-cigarette vapor alone produced mild effects on the lungs, including inflammation and protein damage,” says Thomas Sussan, lead author and an assistant scientist in the environmental health sciences department. “However, when this exposure was followed by a bacterial or viral infection, the harmful effects of e-cigarette exposure became even more pronounced.

“The e-cigarette exposure inhibited the ability of mice to clear the bacteria from their lungs, and the viral infection led to increased weight loss and death indicative of an impaired immune response.”

The researchers believe their study, thought to be the first to examine animal response to e-cigarette inhalation, will serve as a model for future work.

Since their introduction in the United States in 2007, e-cigarettes have prompted debate over the risk they pose. The devices, which at their simplest consist of a battery, an atomizer, and a cartridge, produce a vapor that the user inhales and then exhales.

“We were surprised by how high that number was, considering that e-cigarettes do not produce combustion products,” Sussan says. “Granted, it’s 100 times lower than cigarette smoke, but it’s still a high number of free radicals that can potentially damage cells.”

The U.S. Food and Drug Administration last spring announced that it would regulate e-cigarettes, which are projected to overtake cigarettes in sales in the next decade. Teen use of e-cigarettes outpaces cigarette use, according to a recent survey. According to the Centers for Disease Control and Prevention, more than a quarter-million teenagers who don’t smoke tobacco reported using e-cigarettes in 2013.

From Johns Hopkins University via Futurity.org