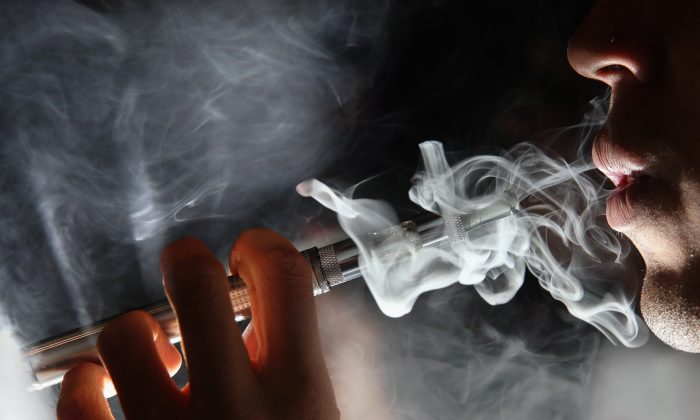 In this photo illustration, a man smokes an E-Cigarette at the V-Revolution E-Cigarette shop in Covent Garden on August 27, 2014 in London, England. (Photo by Dan Kitwood/Getty Images)
New York

A 14-year-old has been blinded in one eye and damaged in the the other due to an e-cigarette explosion after a Vape shop clerk in a Brooklyn mall plugged the vaporizer into the wrong battery.

The incident occurred on April 5 at Plaza Vapes kiosk in Kings Plaza Mall.

“In my left eye, I have a cut through the cornea and I can’t see out of it, and on my right eye, the cornea was cut halfway through and I can see a little bit,” Leor Domatov told Daily News.

He also suffered chemical burns on both hands, “It’s very painful,” he said.

Domatov said he was sampling one of the devices.

He gave it to me to hold and when I was holding it, it exploded in my hands and my face.
— Leor Domatov

According to state and local laws, it is illegal to allow minors to buy or handle vape devices. One must be 21 or older.

“The idea that they were allowing him to sample the products is outrageous,” Marc Freund, a partner of the firm Lipsig, Shapey, Manus & Moverman P.C. told Daily News.

Freund, who was hired by Domatov’s father, plans to sue the mall and the owner of kiosk, Fox News reported.

“Leor was being marketed at the entrance of the Kings Plaza Mall,” Freund told PIX11, “a mall that caters to children, and they’re marketing these products, causing all these injuries.”

The city’s Department of Consumer Affairs said it is looking into the incident.

“It is illegal to sell electronic cigarettes to customers under 21 in New York City, and we will be visiting this retailer to ensure they follow the law,” the agency said in a statement.

In New York City, electronic cigarettes are included in the Smoke-Free Air Act.

“You are not allowed to use an e-cigarette in places where smoking is prohibited, including bars, restaurants, offices, parks, and beaches,” the law states.

E-Cigarette Use by Age | HealthGrove