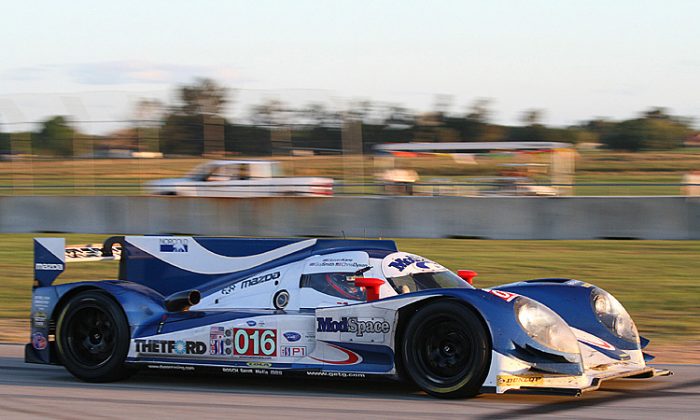 Dyson Racing will not be bringing its Lola-Mazdas to Le Mans for the 24-hour race this year. (James Fish/The Epoch Times)
Motorsports

“We fully intended to participate in this year’s Le Mans event,” Chris Dyson, driver, Vice President, and Sporting Director of Dyson Racing, said in a press statement. “Following six months of intense effort, we have not been able to assemble the financial resources necessary to complement the technical and organizational assets we already had in place with Lola, Dunlop and Status Grand Prix.

“With heavy hearts, therefore, we are returning the two invitations to the ACO. We are excited about going to Le Mans in the future, but unfortunately, the economic timing did not work out this year.

“We and our partners at Mazda, Lola, and Dunlop, along with G-OIL and ModSpace will continue our focus on repeating as ALMS champions.”

Dyson Racing had teamed up with European-based team Status Grand Prix to help manage the logistics of shipping two cars to France and running them for 254 hours. Status GP has provided commercial and technical help for other Le Mans teams, as well as operating a successful GP3 team.

The team had earned two automatic entries by winning the ALMS P1 class and the Michelin Green-X Challenge in 2011, and had planned to enter its two brand new 2012 Lola B60-12s powered by 2-liter turbocharged Mazda/AER engines.

Running at Le Mans has long been a dream for Dyson Racing. In a press release from earlier this year, Dyson said, “Both my dad and I have raced at Le Mans and have always said we would go back with our team when we were able to run competitively with a proper program.

“Even with our long-term history in endurance racing, entering Le Mans propels our team to its next native level. It is the greatest endurance race in the world.”

Dyson Racing, which now owns three Lola-Mazdas, two B60-12s and a B60-11, will continue to provide cars and support to guest drivers. Michael Marsal and Eric Lux drove the #20 Dyson B60-11 Lola Mazda to a third-in-class finish at the recent ALMS Long Beach race, finishing right behind Chris Dyson and Guy Smith’s #16 Dyson Lola-Mazda in P1.

Marsal will be driving the #20 at shorter races for the rest of the season. The third car should be hitting the track at later events—so far the team has not announced a finalized deal.