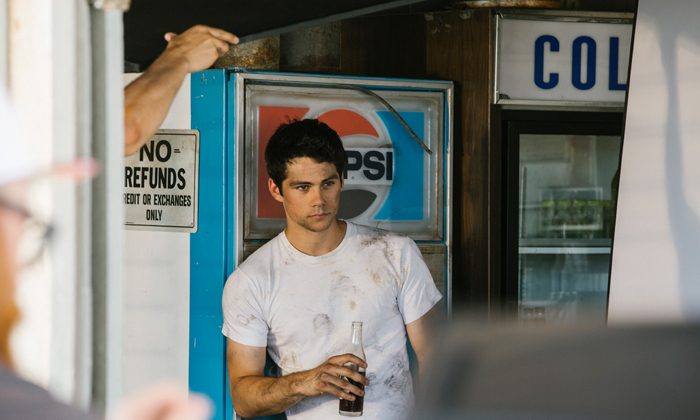 Dylan O’Brien is in new photos for the upcoming issue of Teen Vogue.

O’Brien, 22, best known for his role as Stiles in Teen Wolf, and who has the main spot in the upcoming Maze Runner as Thomas, posed in a dirty t-shirt in some type of throwback gas station/convenience store for the magazine.

The photo shoot makes it look like O’Brien got dirty because he’s a mechanic, but another photo shows the actor getting dirt applied to his face by a makeup artist.

The Maze Runner is filming on location in Baton Rouge, Louisiana, according to the magazine.

“We have eight weeks and 30 million dollars,” Dylan said.

“If we pull it off, people will be like, ‘How the hell did they do that?'”

“This will forever be one of the best experiences I’ve ever had,” he added.

O’Brien noted that he was initially close to being passed over for the role of Thomas, with director Wes Ball believing that his hair was “too MTV” for the role.

But he got the gig as Thomas, who wakes up in a strange community surrounded by giant rock walls that close every night. The boys there, who refer to themselves as the Gladers, send runners out into the maze beyond the walls each day to try to find a way out.

Their routine is disrupted by the arrival of Thomas, and a girl the next day.

Kaya Scodelario, Will Poulter, and Thomas Brodie-Sangster are among the other cast members. The cast is living together in a local, extended-stay hotel.

“We have a great vibe on our set,” Dylan said. “I host rehearsals outside my hotel room every night, and we’ll all run our scenes for the next day. I have a little buddy relationship with every single one of them.”

He didn’t have much time to prepare, finishing shooting Teen Wolf in Los Angeles and only a week later heading to Baton Rouge.

“I worked with my stunt double for only a few days in preproduction,” he said. “But I felt it suited Thomas to not be in amazing shape.”