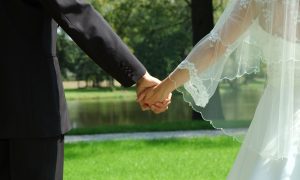 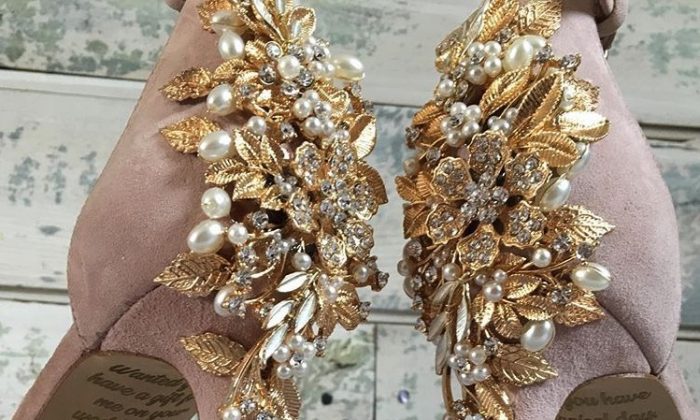 A British woman was moved to tears when she received a pair of custom wedding shoes on which her deceased mother left a message before passing away. (Lace and Love/Instagram)
UK

The story of a woman whose mother left a secret message hidden on her wedding shoes before dying of cancer is warming the Internet.

According to a BBC report, bride-to-be Emma, from Kibworth Beauchamp in Leicestershire, UK, got engaged in 2016 but just one month later, her mother was diagnosed with terminal cancer.

Emma—identified in the report by her first name only—hoped her mother could live long enough to attend her wedding.

Emma recently received a delivery ahead of her big day in August 2019—a pair of wedding shoes.

She told the BBC she was “absolutely shocked” to discover her mother had secretly paid for the shoes and left Emma a touching message.

Shoes filled with emotion:
A bride put a deposit on a custom pair. Unbeknown to her, her terminally ill mum then paid for them and left a note to be put on the soles. Sadly she died before they were finished. The bride was so emotional upon receiving them. #Shoes #weddingshoes pic.twitter.com/xSSC5IOYfv

“Wanted you to have a gift from me on your wedding day. Your wedding shoes are my gift to you.

“Hope you have a magical day. Lots and lots of love and big hugs, MUM xxxx”

“It’s been so hard planning a wedding without having her with me, and I have had lots of tears,” Emma told the BBC.

She said the shoes came in the post on Saturday, March 9.

“I had absolutely no idea, my fiancé knew about it. It was just an absolute shock,” she said. “I pulled out the one shoe and I saw part of the message and I couldn’t think who it would be.”

Emma said she was overcome with emotion when she read the entire message and it dawned on her who was its author.

“I started to cry … I was just absolutely in bits. I couldn’t breathe, I couldn’t talk.”

Amanda Weise, who runs the online shop Lace and Love, which sells handcrafted shoes and also offers personalization services, told the BBC it was “lovely” to be able to be involved in the touching gift.

“It’s probably the most emotional pair of shoes I’m ever going to make,” Weise told the news outlet. “Hopefully it will give her a bit of comfort on the day. It will be like walking down the aisle with her mum.”

The Twitter account of Lace and Love posted a photo of the shoes, with the caption: “Shoes filled with emotion.”

Shoes filled with emotion:
A bride put a deposit on a custom pair. Unbeknown to her, her terminally ill mum then paid for them and left a note to be put on the soles. Sadly she died before they were finished. The bride was so emotional upon receiving them. #Shoes #weddingshoes pic.twitter.com/xSSC5IOYfv

Weise said Emma’s mother contacted her several weeks after the initial order was made for the shoes.

“It was her mum who told me she had cancer and wouldn’t be there for Emma’s wedding day. She told me on the first message she sent me,” Weise told the BBC. “I think Emma was kind of hoping she would see the wedding. From the message that she wrote, I think she did intend for it to be after she was gone.”

The story recalls a heartwarming incident in which a police officer in New Jersey left a generous $100 tip—along with a touching note on the check—after learning that his server was pregnant with her first child.

Brian Cadigan, the father of the waitress, shared the story on Facebook over the weekend, posting a photograph of the extraordinary receipt that was reportedly issued at the Lamp Post Diner in Gloucester Township, on Friday, Feb. 15, at 12:39 p.m.

Cadigan said the officer—who wanted to remain anonymous, according to a Fox News report—left the $100 tip on a $9 check and capped the touching gesture off with a note, “Enjoy your first, you will never forget it.”

Cadigan wrote in the post, “You always hear about how bad the police are, how they treated you like dirt, how they are on a power trip.”

“Yes I am sure there are some bad apples,” the waitress’s father continued, “but most of them are just doing their jobs, they deal with the worst of society every day and have to keep going back [every day] and deal with it all over again.”

Cadigan then praised the police for the things they do that “most people will never know about” before describing his daughter’s encounter with the police officer.

“My daughter is a waitress at a local diner, she is also 7 months pregnant and working still to save as much money as she can,” Cadigan wrote, adding that she “was working the lunch shift when a Voorhees Twp police officer came in, he was pleasant, and had his lunch by himself.”

You always hear about how Bad the Police are, How They treated you like dirt, how they are on a Power Trip, Yes I am…

After finishing his meal, the police officer signed the bill, Cadigan wrote, and “left her a $100 tip on a $9.00 ticket and the note simply said ‘Enjoy your first, you will never forget it.’”

“What a wonderful person to not only leave a VERY generous tip, but a lovely message,” he wrote. “I don’t know you [Mr.] Police Officer, but you made my little girl cry, and made her year. Thank you, I always had the utmost respect for Officers, but you went above and beyond not just an officer, but a beautiful human being. God Bless.”