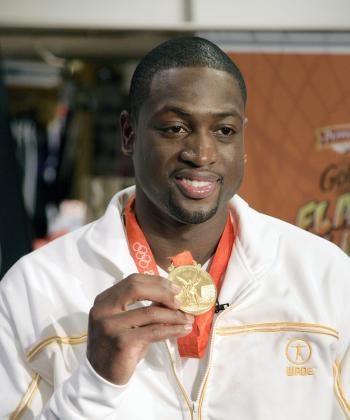 NEW YORK—Miami Heat player Dwyane Wade arrived at the official NBA Store on Fifth Avenue to the sound of screaming of fans and the flashing of cameras. Fans leaned over the circular railing overhead trying to catch a better look at the NBA star and Olympic gold medal winner. He’s not here to play basketball though; today he is here for the children. Pepperidge Farm and Wade are cooperating in an effort to curb an epidemic of child obesity.

The new program is called Goldfish Games and it focuses on helping children have fun while living a healthy and active lifestyle.”Kids always brighten the day up” said Wade, “It’s always great to see the excitement on their faces.”

Wade was the number five pick of the 2003 NBA draft. In that first year of NBA playoffs, He led the Miami Heat in scoring in seven of the 13 games. Although they couldn’t beat the top seeded Indiana Pacers, Wade left a mark with high flying dunks, and a 21 point per game average. Since then he’s been a crucial element in the Heat’s game plan. Teammate Shaquile O’neal is on the record saying that Wade was the most phenomenal second year player he had ever seen since himself and that he possesses “fire” and “heart”.

“As both a professional athlete and the father of two young children, I know firsthand the importance of teaching our children the significance of a healthy lifestyle, so they have the tools and the knowledge to make good choices about nutrition and fitness”, Wade affirmed.

The Goldfish Games includes a list of traditional games but also gives children an opportunity to be creative and design their own games.  After logging on to the website (www.pfgoldfish.com), children can take the Goldfish Games pledge to be active and participate in a weekly game which is suggested by Wade and the Goldfish Games energetic mascot, Xtreme.

The website also has an interactive feature that generates custom games from a selection of sporting equipment. Many of the games are inspirations for children to create even more games from many varied household items.

To further encourage kids to be active, the Goldfish Games Xtreme Challenge will start on October 1, 2008. The challenge is a contest encouraging children ages 6-12 to create their own game and submit their entry to Pepperidge Farm.