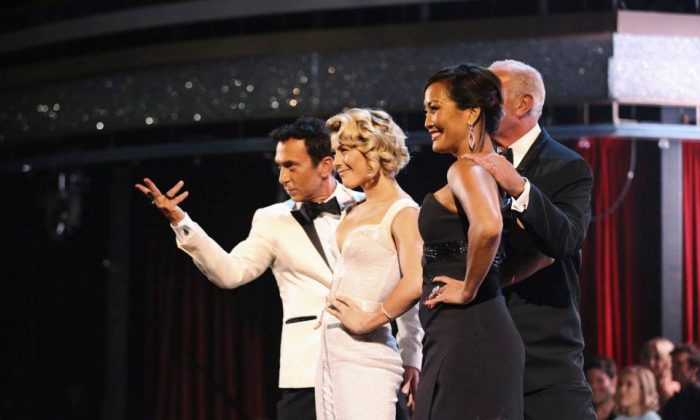 The Dancing With the Stars judges in week 1, season 19. (ABC)
Entertainment

Dancing With the Stars: Recap, Scores, and Video Highlights From Week 2

Dancing With the Stars week 2 performances have kicked off on Monday night.

Randy and Karina, who danced the Cha Cha Cha to “(I Can’t Get No) Satisfaction” by the Rolling Stones, got a 28 out of 40 from the judges.

UPDATE: DWTS Results 2014: Who Gets Eliminated on Dancing With the Stars Results Show Tonight?

Randy said that it was hard to go first, but that it was good because he and Karina would get to watch everyone else afterward. They seem safe from elimination unless everyone else has a fairly strong performance.

They danced the Foxtrot to “Call Me Maybe” by Carly Rae Jepsen.

“It felt great,” Janel said after the dance, just before they got better scores than week 1. “I’m so happy!” she added after getting the scores, 34/40.

Lea Thompson and Artem Chigvintsev went next, dancing the the Jive to “Land of 1000 Dances” and earning high praise from the judges. “The ladies are killing it tonight!” said Carrie Ann Inaba.

“You gave me chills,” added Julianne Hough. “You’re like a hot mama leopard.”They scored a 35/40.

Michael Waltrip and Emma Slater went next, dancing to the Samba to “Girls in Bikinis” by Lee Brice.

“The world needs more of what you got,” Carrie said. “You both are so lighthearted. However, I didn’t see much of samba.”

“It was wild and wacky,” Len Goodman added, noting that he liked it.

“I was just so happy, I just couldn’t contain myself,” Waltrip said. They got 24/40 for the lowest score so far.

Tavis Smiley and Sharna Burgess went next, dancing the Cha Cha Cha to “Boogie Wonderland” by Earth, Wind & Fire after some video clips showed Tavis getting testy during rehearsals.

Alfonso Ribeiro and Witney Carson went next, dancing the Samba to “Gettin’ Jiggy Wit It” by Will Smith.

“You’re great, you’re going to make everything look wonderful because you have the Alfonso groove,” Julianne said, but she added that she wants to see “the Latin and the ballroom groove.”

“Your performance is astonishing,” Bruno Tonioli said, but also said that things needed to bee a little sharper.

Bethany Mota and Derek Hough went next, dancing the Foxtrot to “All About That Bass” by Meghan Trainor. Before the performance, Mota revealed that Taylor Swift tweeted a video from their week 1 performance “and it trended!”

Also, rehearsal videos showed that Mota hurt her ankle during the week.

“Foxy Bethany, that really tickled my fancy,” Bruno said about the dance. “Dance is not just doing the movements correctly, it’s about telling the story … I thought that was a really wonderful routine,” Carrie Ann added.

After the dance, Mota said her ankle was doing better though it started hurting again after the performance. The team got 32/40. Derek said that if they make it to another week, they’re going to dance to “an old classic.”

Betsey Johnson and Tony Dovolani went next, dancing the Foxtrot to “Girls Just Wanna Have Fun” by Cyndi Lauper.

Antonio Sabato Jr. and Cheryl Burke went next, dancing the Rumba to “Adorn” by Miguel.

“This was leaps and bounds [better than last week],”Julianne said after the dance. “And the connection between you two was beautiful.”

Tommy Chong and Peta Murgatroyd went next, dancing the Salsa to “Higher” by Gloria Estefan.

“That was fun, that was fast, the footwork was pretty awesome,” said Julianne. “We can party like it’s 1969!” Bruno added. “You’ve really proven that age is a state of mind.”

Jonathan Bennett and Allison Holker went next, dancing the Cha Cha Cha to “Sing” by Ed Sheeran in week 2.

“I loved seeing this side of you, I thought you brought out this dangerous character, but I feel you didn’t put enough cha cha into it,” Carrie Ann said. “This wasn’t sharp, this was jerky,” Len added. “Loads of flim-flam, not enough content.”

“I wanted to bring a fresh take to choreography, and if the judges don’t like it, I’ll learn,” said Allison.

“I like the fact that your jam took you back to your roots, but somehow jazz and country didn’t do it for me,” Len said. But Julianne said that Sadie “hit it hard.” “Young and fresh–it was great,” Bruno added.

Check back for updates …