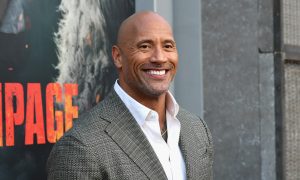 What Tequila and Dwayne Johnson Have in Common, Besides My Unwavering Appreciation
0
Share Now
TelegramFacebookTweetEmailTellMeWeReddit
Copy Link
Entertainment News

Dwayne “The Rock” Johnson, the famed actor, surprised his mother with a brand new house for Christmas.

He posted a video on Instagram over the weekend showing his mom Ata’s reaction.

“This one felt good. Surprise! Bought my mom a new home for Christmas,” he said in the caption, recounting that while he was growing up the family often moved as his parents struggled to pay the rent.

He then noted that he bought his parents their first house in 1999 but they divorced soon after.

Since then, he’s promised both his mother and father that he would buy them whatever they needed.

This one felt good. Surprise! Bought my mom a new home for Christmas. All our lives growing up we lived in little apartments all across the country. Lived like gypsies on the road from one state to another. The first home my parents ever lived in was the one I bought for them in 1999. They divorced about 5yrs later and as with life, stuff happens and things got a little complicated. Since then I always made sure my mom and dad have everything they’ll ever need – houses, cars etc. But the house this time is a special one and the timing is very meaningful. I told her to treat this card like it’s “Willy Wonka’s Golden Ticket” because she gets to choose any home she wants – anywhere she wants. I always say, if you got a good mama, then you gotta pretty good shot at becoming a decent human being. And somehow, somewhere along the line I became one lucky SOB to be able to make stuff like this happen. Merry Christmas Ma and WOOOHOOO enjoy your new home. Dwanta 🎅🏾

“This gift is a special one though and the timing is very meaningful. I told her to treat this card like it’s ‘Willy Wonka’s Golden Ticket’ because she gets to choose any home she wants—anywhere she wants,” Johnson said.

“I always say, if you got a good mama, then you gotta pretty good shot at becoming a decent human being. And somehow, somewhere along the line I became one lucky [guy] to be able to make stuff like this happen. Merry Christmas Ma and WOOOHOOO enjoy your new home. Dwanta.”

Ata Johnson looks stunned as she reads about the present and laughs while struggling to contain her emotions.

The pair then hugs.

Johnson loves the Christmas holidays and giving out gifts.

Bought my dad a Christmas gift and surprised him. He's had a hard life. This one felt good. My dad, Rocky Johnson is a minimalist. Always has been. Never asks me for much and over the years his needs are always the barest. Crazy story, my dad's dad died when he was 13yrs old. That Christmas, my dad's mom had her new boyfriend over for Christmas dinner. Her boyfriend got drunk and pissed on the turkey. My dad went outside, got a shovel, drew a line in the snow and said if you cross that line I'll kill you. The drunk crossed it and my dad laid him out cold as a block of ice. Cops were called. They told my dad's mom that when her boyfriend regains consciousness, he's gonna kill your son so one of them has got to go. In front of the entire family, my dad's mom looked at him and said get out. He was 13yrs old and now homeless. That f*cked up true story happened in Amherst, Nova Scotia, Canada in 1954. He needed the bare minimum then, just like does now. Over the years, I've moved him into a big home, got him trucks to drive – which he'll literally drive into the ground until I get him something else. Hell, I'll get him anything he wants, but the SOB just won't ask;). Every Christmas, I always think about that story and my dad having every odd stacked against him at 13, but he fought thru it and still made something of himself. Makes me appreciate his struggle and hard work. Also, makes me appreciate the fun times he would beat my ass in the gym so bad when I was 13 and say "If you're gonna throw up, go outside.. and if you're gonna cry, then go home to your mother". I hated it then, but I embrace it now. Made a man outta me. Without pissing on my turkey. 😂👍🏾. Just a small way of saying thank you dad and Merry Christmas! #DwantaClaus🎅🏾

In 2016, he gifted his father a brand new car, recounting how his father had become homeless at age 13 because of a confrontation with his mother’s abusive boyfriend.

When police arrived on the scene, “They told my dad’s mom that when her boyfriend regains consciousness, he’s gonna kill your son so one of them has got to go,” Johnson wrote.

“In front of the entire family, my dad’s mom looked at him and said get out. He was 13yrs old and now homeless,” he added.

Johnson noted that he bought his father cars but his dad is thrifty and will keep driving the same truck as long as he can.

He said his father’s tough love “made a man outta me,” and wished his father a Merry Christmas, posting a picture of the two smiling next to the new vehicle.

Johnson has starred in many movies but soon his new NBC athletic competition reality show, dubbed “The Titan Games,” will begin airing on television.

Chris Watts, a 33-year-old United States Army veteran who is now working as a civilian contractor in Afganistan, is one of the contestants for the first season.

“I saw [Johnson] talking about the show on his Instagram page, he said it would be ‘the most epic and insane athletic competition ever devised,’ and I knew I should give it a shot,” Watts told the Louisville Courier-Journal.

“It was intense from the first round. The first round is ‘Heavy Metal’ and I competed against another guy by carrying heavy cinder blocks chained to either side of a bar while moving up a ramp as quickly as possible. At the top, it was a race to see who could put the bar and weights on a machine and crank it tight.”

“I will never forget how that felt,” he said. “It was tough.”