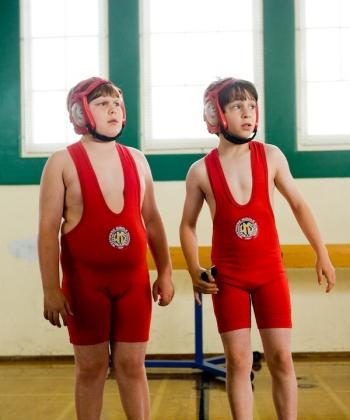 Robert Capron and Zachary Gordon in the movie adaptation of 'Diary of a Wimpy Kid.' (20th Century Fox)
Entertainment

Matthew Rodgers
View profile
Follow
biggersmaller
Print
Diary of a Wimpy Kid is the movie adaptation of Jeff Kinney’s reportedly popular series of children’s illustrated novels. It tells the tale of “smaller than 95 per cent of kids at my school” Gregg Hefley (Zachary Gordon – looking nothing like his Plug from the Beano style inspiration) and his coming-of-age journey through the trials and tribulations of middle school.

Along with his rotund best friend, Rowley (Robert Capron), Gregg navigates life with a fantastically vivid imagination that’s recorded via the scribblings in his diary, in which he notates events filtered through the eyes of a child.

Much like the source material’s staggered journal entry structure, this translates perfectly in that it’s an episodic archive of juvenile stunts. Some are funny – a very weird mother/son Beastie Boys dance competition and a rib tickling rehearsal of ‘Total Eclipse of the Heart’ – and others are repetitively tedious, like any number of the staple scenes that feature our wimpy lead getting picked last at sport. This only adds to the ambling nature of the narrative that only the youngest of children will relate to, or tolerate.

The child actors are also from a mixed ability class; Chloe Moretz is head and shoulders above the lot of ’em, literally. The Kick-Ass queen seems to be about three grades ahead of the rest of them, and she is also assured and likeable as the cameoing cool kid. The problem child is the lead character. He is a smug little jerk with no notion of self deprecation or awareness, and as the narrator how are youngsters meant to empathise with his adolescent arrogance? The way that he treats his admittedly annoying best friend is deplorable, and even if it helps the moralistic wrap-up, he was still a douche to him throughout.

The only intrigue comes from the constant callbacks to a piece of mouldy cheese that is stuck to the playground floor. What is it doing there? Does it have a deeper meaning? Am I really having to deconstruct a piece of cheese?

Aiming to be a feature length version of Malcolm in the Middle, and initially promising to mature into Wonder Years territory, Wimpy Kid sadly ends up without the nuance or mischievous hilarity of either. But if you, or more importantly your kids, are left in stitches by boogers, kicks to the nether regions, or disgusting toilet humour, then this is the movie for your family.