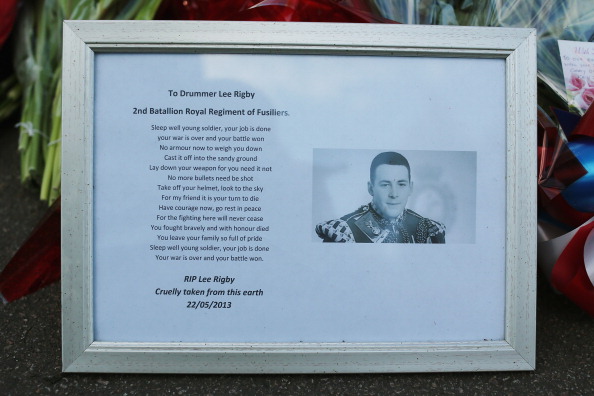 A framed picture of Drummer Lee Rigby of the 2nd Battalion the Royal Regiment of Fusiliers who was killed yesterday, lays with flowers outside Woolwich Barracks on May 23, 2013 in London, England. (Dan Kitwood/Getty Images)
Europe

Drummer Lee Rigby was the victim in Wednesday’s attack in Woolwich, London, according to the British government.

Rigby, 25, of Manchester, was part of the 2nd Batallion the Royal Regiment of Fusiliers, according to the U.K. Ministry of Defense. He is survived by his 2-year-old son, Jack.

“An extremely popular and witty soldier, Drummer Rigby was a larger than life personality within the Corps of Drums and was well known, liked and respected across the Second Fusiliers. He was a passionate and lifelong Manchester United fan.,” the defense statement reads.

Rigby served in Afghanistan, Cyprus, Germany, and later was stationed in London.

“Lee was lovely. He would do anything for anybody, he always looked after his sisters and always protected them. He took a ‘big brother’ role with everyone,” his family said in a statement posted by the Defense Ministry.

He was killed in a grisly attack in Woolwich on Wednesday. Two men are suspected to have run him over with their vehicle before jumping out and hacking him to death with knives while people watched, reported The Associated Press.

“We swear by Almighty Allah we will never stop fighting you. The only reasons we have done this is because Muslims are dying every day. This British soldier is an eye for an eye a tooth for tooth. We apologize that women had to see this today but in our lands our women have to see the same. You people will never be safe. Remove your government. They don’t care about you,” the man said in the video.