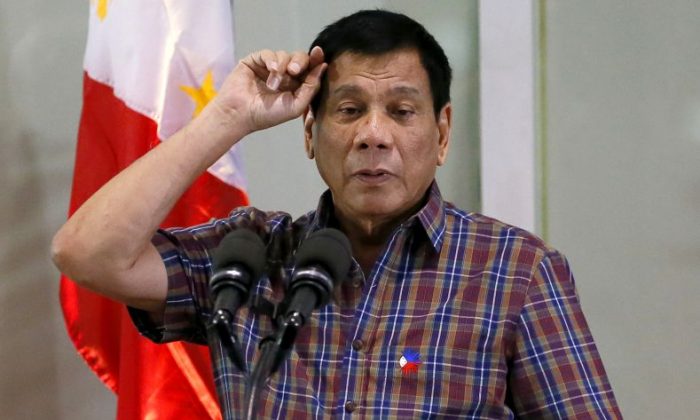 FILE - In this Aug. 31, 2016, file photo, Philippine President Rodrigo Duterte gestures as he addresses Overseas Filipino Workers who were repatriated back to the country at the Ninoy Aquino International Airport in Pasay city, south of Manila, Philippines. Duterte, who disparaged the pope and others who controvert his worldview, warns U.S. President Barack Obama on Monday, Sept. 5, 2016, not to question him about extrajudicial killings. (AP Photo/Bullit Marquez, File)
International

Duterte Tells Obama Not to Question Him About Killings

MANILA, Philippines—Philippine President Rodrigo Duterte warned President Barack Obama on Monday not to question him about extrajudicial killings, or “son of a [expletive] I will swear at you” when they meet in Laos during a regional summit.

Duterte said before flying to Laos that he is a leader of a sovereign country and is answerable only to the Filipino people. He was answering a reporter’s question about how he intends to explain the extrajudicial killings to Obama. More than 2,000 suspected drug pushers and users have been killed since Dutertelaunched a war on drugs after taking office on June 30.

In his typical foul-mouthed style, Duterte responded: “I am a president of a sovereign state and we have long ceased to be a colony. I do not have any master except the Filipino people, nobody but nobody. You must be respectful. Do not just throw questions. Putang ina I will swear at you in that forum,” he said, using the Tagalog phrase for son of a [expletive].

It isn’t clear whether Obama planned to raise the issue of extrajudicial killings with Duterte during a scheduled meeting on the sidelines of the summit of the Association of Southeast Asian Nations.

Asked at a news conference in Hangzhou, China, whether he still intends to meet with Duterte and raise the issue of extrajudicial killings, Obama said he had instructed his aides to assess whether it is still possible for the two leaders to have a constructive meeting in Laos.

“I always want to make sure that if I’m having a meeting that it’s actually productive, and that we’re getting something done,” Obama said.

“We recognize the significant burden that the drug trade plays not just in the Philippines but around the world, and fighting narco-trafficking is tough. But we will always assert the need to have due process and to engage in that fight against drugs in a way that’s consistent with basic international norms. And so, undoubtedly, if and when we have a meeting this is something that is going to be brought up,” said Obama, who has been attending a meeting of the Group of 20 nations.

“Who is he to confront me?” Duterte said in his remarks, adding that the Philippines had not received an apology from the United States for misdeeds committed during its colonization of the Philippines.

He pointed to the killing of Muslim Moros more than a century ago during a U.S. pacification campaign in the southern Philippines, blaming the wounds of the past as “the reason why (the south) continues to boil” with separatist insurgencies.

Last week, Duterte said he was ready to defend his bloody crackdown on illegal drugs, which has sparked concern from the U.S. and other countries.

Duterte said he would demand that Obama allow him to first explain the context of his crackdown before engaging the U.S. president in a discussion of the deaths.