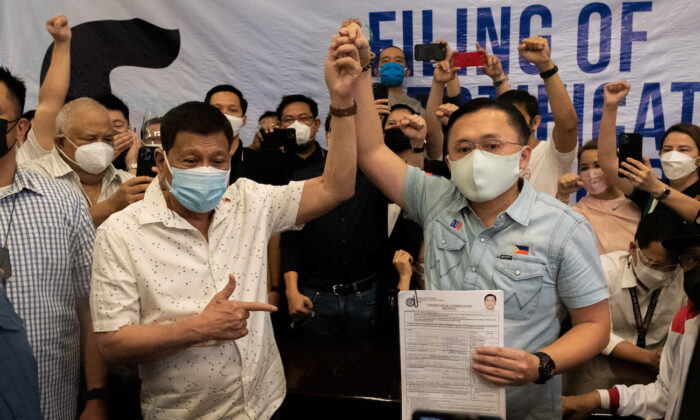 Philippines President Rodrigo Duterte’s preferred successor, Sen. Christopher “Bong” Go, has announced his withdrawal from the May 2022 presidential race, saying that it was “not yet my time.”

Go, a close aide of Duterte, cited his family’s resistance to his presidential run and admitted he was unprepared to seek the country’s highest elected post.

“In the past few days I realized that my heart and my mind are contradicting my actions. Those are my reasons. That’s why I am withdrawing from the race,” Go told reporters in San Juan City on Nov. 30, according to The Manila Times.

The senator also mentioned that he did not want Duterte to strain himself to campaign for him.

“He [Duterte] is already old and he has already given so much for the country, I do not want to give him more problems. I am loyal to him and I promised him that I will stay with him for life. That is my commitment to him,” he said.

Go is a first-term senator who was elected in 2019. In October, he filed his candidacy for the vice presidency but decided to withdraw and run for the president under the Pederalismo ng Dugong Dakilang Samahan party instead, which is allied with the ruling PDP-Laban.

Go hinted having doubts about his presidential bid earlier this month. Presidential adviser Jacinto Paras told Rappler that Go was “still contemplating [his bid] because he is overwhelmed with so much work as a senator,” but added that his doubts were resolved after receiving support from governors.

Duterte, 76, is barred by the Philippines constitution to seek reelection. He announced his retirement from politics in October, before making a surprise move earlier this month to run for a senator seat.

With Go dropping out of the presidential race, it remains unclear who Duterte will support as a candidate next.

“I and President Duterte are ready to support whoever will truly serve and can continue and protect Duterte’s legacy towards a more comfortable and safe and prosperous life for our children,” Go said in a speech streamed on Facebook.

Commission on Elections spokesperson James Jimenez said that Go is not entitled to substitution as he has withdrawn from the race voluntarily.

Duterte’s daughter, Davao Mayor Sara Duterte-Carpio is running for the deputy post alongside the son of late Philippines dictator and namesake, Ferdinand Marcos Jr,. who has emerged as an early frontrunner.

The Southeast Asian nation of 110 million people holds elections in May 2022 for positions from president down to governors, mayors, and local officials.