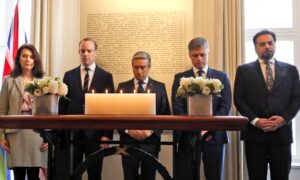 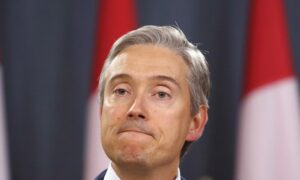 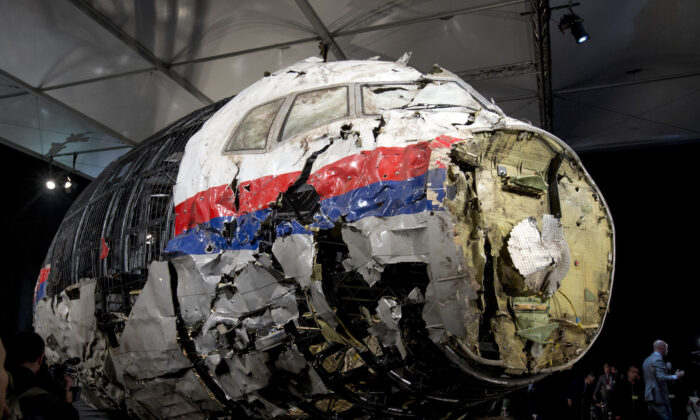 Dutch Trial Opens for 4 Suspects in Downing of Flight MH17

SCHIPHOL, Netherlands—As the trial of three Russians and a Ukrainian charged with multiple counts of murder for their alleged involvement in the 2014 downing of Malaysia Airlines Flight 17 began March 9, a Dutch prosecutor solemnly read out the names of all 298 people killed in the attack.

As expected, the suspects didn’t appear for trial and weren’t in the courtroom as prosecutor Dedy Woei-a-Tsoi read out the victims’ names.

Some of the relatives of the dead who were in the courtroom bowed their heads and closed their eyes as they listened to the names.

“The silence in this room when the names were being read out of all those people who lost their lives makes abundantly clear that everybody is sitting here lost in their thoughts,” Presiding Judge Hendrik Steenhuis said before adjourning the hearing for a lunch break.

The trial began with Steenhuis explaining the intricacies of Dutch criminal proceedings to families monitoring the trial in the Netherlands and around the world and outlining efforts to summon the four suspects to attend.

None of them did and only one appointed lawyers to represent him in the case. Steenhuis ruled that the trial would continue in their absence.

It’s a day that has been a long time coming for family and friends of those killed on July 17, 2014, when a Buk missile blew MH17 out of the sky above conflict-torn eastern Ukraine.

Five black-robed judges—three who will hear the case and two alternates—filed silently into a packed courtroom on the edge of Schiphol, the airport where the doomed flight took off, heading for Malaysian capital Kuala Lumpur. A small number of family members of victims were in court, others watched the proceedings via a video link from a conference center in the central Netherlands.

Among those in court was Piet Ploeg, who lost his brother, Alex, his sister-in-law, and his nephew. Ploeg sat in court, his hands folded in front of him, listening attentively as the case started.

“Next of kin want justice, simple as that,” he said. “We want justice for the fact that 298 people are murdered, and this court and the hearings (that) will start today will give us more clarity about what happened, why it happened and who was responsible for it.”

Steenhuis said the criminal file in the case contains some 36,000 pages and “an enormous amount of multimedia files.” Examining it at trial “will be a very painful and emotional period.” “There are many victims and, of course, because of that there are many next of kin,” he said.

Jon and Meryn O’Brien flew from Sydney to witness the start of the unprecedented Dutch trial, hoping for justice for their son Jack.

“The trial is important because the truth still matters,” Jon said on the eve of the trial. “You shouldn’t be able to murder 298 people and for there to be no consequences, regardless of who you are. So it’s important the truth about that is told.”

The O’Briens were among families who arranged 298 white chairs in rows resembling aircraft seating outside the Russian Embassy in The Hague on March 8 to protest what they see as Moscow’s deliberate attempts to obscure the truth about what happened.

Pulatov hired a firm of Dutch lawyers to represent him. He also had a Russian lawyer in court, Steenhuis said. The lawyers will be allowed to raise preliminary objections such as challenging the court’s jurisdiction at later hearings, if they want to.

Russia has consistently denied involvement in the downing, even after prosecutors alleged that the Buk missile system that destroyed the passenger plane was transported into Ukraine from the Russian 53rd Anti-Aircraft Missile Brigade’s base in Kursk and the launching system was then returned to Russia.

In a statement, British Foreign Secretary Dominic Raab called the trial “an important milestone towards accountability for the shooting down of MH17” and the deaths of 298 people, including 10 Britons.

The case is a regular Dutch criminal trial with an unprecedented number of victims.

Legal expert Marieke de Hoon of Amsterdam’s Vrije University characterized the case as “both ordinary and extraordinary at the same time.”

Under Dutch law, family members are allowed to make victim impact statements and seek compensation; that will likely happen sometime later this year.

“For me, the most important thing [is] will there be enough evidence that the judge can make a conclusion: Guilty,” said Anton Kotte, who lost three family members. “If that’s the case, then I will be satisfied, because I know at that moment another level will be attacked—a political level will be attacked worldwide in the direction of Russia.”