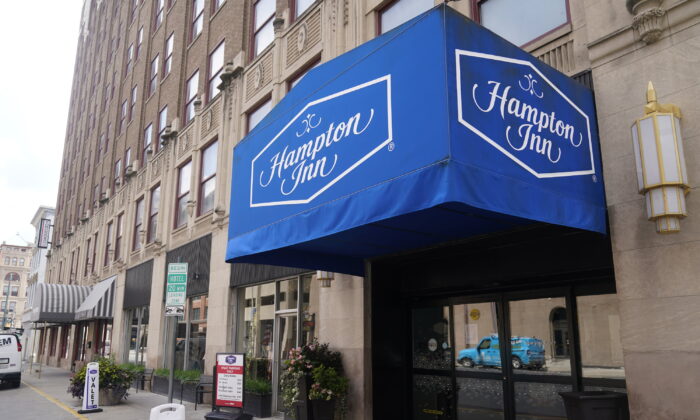 The Hampton Inn in Indianapolis on Aug. 29, 2022. (Darron Cummings/AP Photo)
Crime and Incidents

Dutch Soldier Shot in Indianapolis Dies of His Injuries

THE HAGUE, Netherlands—One of three Dutch soldiers wounded in a shooting outside a hotel in downtown Indianapolis over the weekend has died, the Dutch Defense Ministry said Monday.

The commando died of his injuries “surrounded by family and colleagues,” the ministry said in a statement.

The soldier was one of three members of the Dutch Commando Corps who were shot and wounded early Saturday after what Indianapolis police believe was a disturbance outside the hotel where they were staying, authorities said.

The Marion County coroner’s office in Indianapolis identified the victim as Simmie Poetsema, 26, but didn’t immediately release any additional information.

The two other wounded soldiers were conscious, the Defense Ministry said.

The shooting occurred about 3:30 a.m. in Indianapolis’ entertainment district. The Defense Ministry said the three soldiers were from the Commando Corps and were in Indiana for training.

Indianapolis police said they believe some sort of altercation between the three victims and another person or people led to the shooting. No arrests have been made.

The Indiana National Guard said the soldiers had been training at the Muscatatuck Urban Training Center, a 1,000-acre complex about 40 miles southeast of Indianapolis. The Guard said in a statement that the center is used for training by the Department of Defense “as well as other allies.”