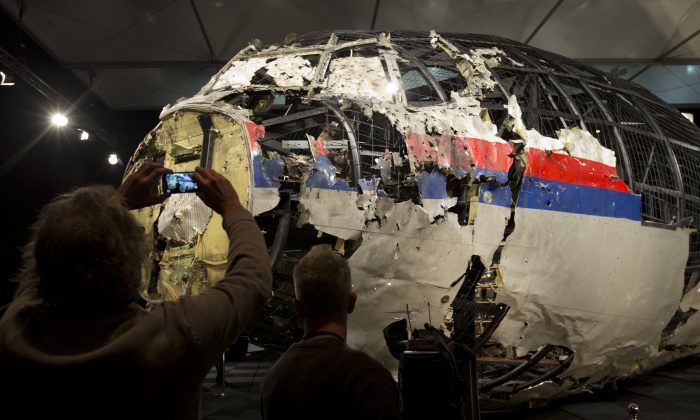 Journalists take images of part of the reconstructed forward section of the fuselage, in this file photo. (AP Photo/Peter Dejong)
International

NIEUWEGEIN, Netherlands—Dutch-led criminal investigators said Wednesday they have solid evidence that a Malaysian jet was shot down by a Buk missile moved into eastern Ukraine from Russia.

Wilbert Paulissen, head of the Central Crime Investigation department of the Dutch National Police, said communications intercepts showed that pro-Moscow rebels had called for deployment of the mobile surface-to-air weapon, and reported its arrival in rebel-controlled areas of eastern Ukraine.

From that and other evidence collected by the Joint Investigation Team, “it may be concluded MH17 was shot down by a 9M38 missile launched by a Buk, brought in from the territory of the Russian Federation, and that after launch was subsequently returned to the Russian Federation,” Paulissen told a news conference.

The conclusions were billed as results of a two-year Dutch-led criminal probe of the disaster that claimed 298 lives.

A separate investigation by Dutch safety officials last year concluded that the Amsterdam-to-Kuala Lumpur flight was downed by a Buk missile fired from territory held by pro-Russian rebels.

Dutch police spokesman Thomas Aling said the joint investigation findings differ in that they are designed to be solid enough to be used as evidence in a criminal trial. Where and when a trial might take place is still to be determined, Aling said.

Russia has consistently denied allegations that pro-Moscow rebels in eastern Ukraine were responsible. On Monday, the Russian military said it has new radio-location data that show the missile that downed the Boeing 777 did not originate from rebel-controlled territory, and said it would turn the data over to investigators.

Kremlin spokesman Dmitry Peskov reiterated that assertion on Wednesday ahead of the Dutch report.

“If there was a rocket it could only have been launched from a different area,” he told reporters, referring to Russian radar data. “You can’t argue with it, it can’t be discussed.”

In the Joint Investigation Team, Dutch police and judicial officials have been working with counterparts from Australia, Belgium, Malaysia and Ukraine, seeking to gather the best possible evidence for use in prosecution of the perpetrators.

They have faced extraordinary challenges: the crime scene in Ukraine’s eastern Donetsk oblast where the plane crashed on July 17, 2014, killing all aboard, was located in an active war zone, and during the days following the crash pro-Kremlin militants limited access to the site.

Eleven containers crammed with debris from the jetliner were ultimately brought to the Netherlands. A research team took soil samples in eastern Ukraine and established the location of cellphone towers and the layout of the local telephone network.

Forensic samples were taken from passengers’ and crew members’ bodies and luggage, and satellite data and communications intercepts were scrutinized. The team also appealed for information from witnesses who may have seen the missile launch.

About two-thirds of the passengers aboard MH17 were Dutch nationals; the crew members were Malaysians. Malaysia proposed setting up an international tribunal to try those responsible for the plane’s destruction, but Russia vetoed a U.N. Security Council resolution in favor of a tribunal.