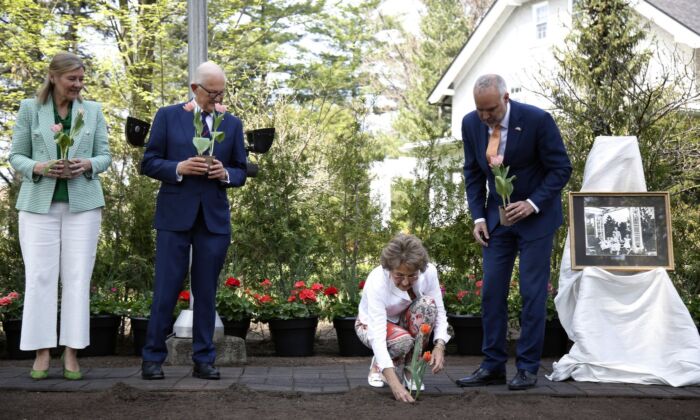 Princess Margriet of the Netherlands plants tulips with her husband Pieter van Vollenhoven, second from left, Ambassador of the Netherlands to Canada Ines Coppoolse, left, and National Capital Commission CEO Tobi Nussbaum, right, at Stornoway in Ottawa, May 12, 2022. (The Canadian Press/David Kawai)
Canada

Dutch Princess Returns to Ottawa, Where She Was Born During Second World War

Princess Margriet of the Netherlands is today visiting Ottawa, the city where she was born during the Second World War.

The princess was born at Ottawa’s civic hospital after the Dutch royal family fled to Canada to escape Nazi occupying forces in 1940.

During the official visit to Canada, she is meeting the prime minister, Governor General and MPs and speaking with Canadian veterans who helped liberate the Netherlands from the Nazis.

She is also planning to visit the Canadian Tulip Festival and plant tulips at Stornoway, where she and her family lived when she was a child and is now the residence of the leader of the Opposition.

The official visit, which will run until Monday, was originally planned for 2020 to commemorate the 75th anniversary of the liberation of the Netherlands.