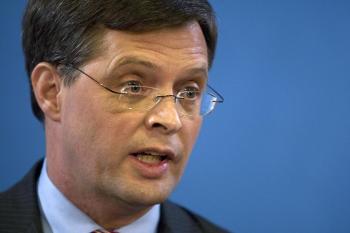 Balkenende told Dutch television Channel NOS that, “I clearly pointed out the human rights issues and made them aware of Dutch concerns on the subjects of press freedom, the position of human rights defenders, and the rights of minorities.”

Dutch Minister of Foreign Affairs Maxim Verhagen reported to the Dutch Parliament on August 5, that the human rights situation in China has recently been getting worse instead of better.

The Prime Minister’s speech comes two days after Dutch journalist Henk van der Sluis was removed from a district in Beijing where he was going to watch the Olympic opening ceremony on television with ordinary Chinese people.

The newspaper that van der Sluis works for reported that even before he the reporter had entered the house, a uniformed man working for the Beijing Olympic organizing committee appeared and urged him to leave, because they could not guarantee his safety.

“That is Chinese for ‘We don’t allow you to be here’… When it comes to outer appearance, the People’s Republic is the country of unlimited possibilities. But behind the façade is the harsh reality of limited personal freedom,” said the Algemeen Dagblad report.

According to the paper, the Dutch Journalist Association commented that, "this is a typical example of the poor situation of journalists in China. Hopefully more journalists will become aware of the state of affairs in China."