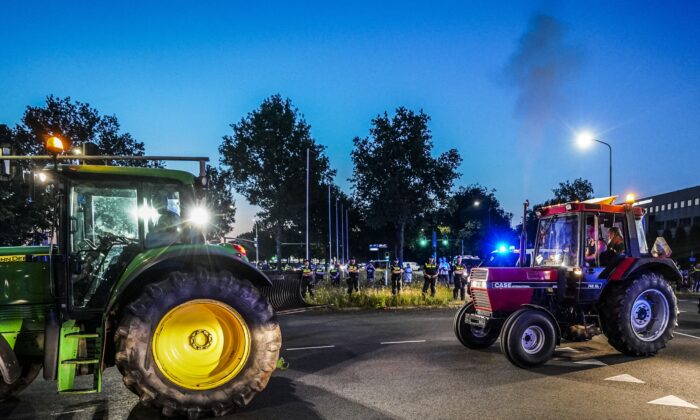 Dutch police confirmed on July 5 that officers in the northern part of the country fired both warning—and then targeted—shots at a tractor taking part in a protest against climate mandates.

Police say the tractor was driving toward officers and their vehicles—but activists say footage of the incident tells a different story.

The mandated restrictions on nitrogen greenhouse gas emissions are expected to slash livestock numbers and shutter farms across the Netherlands.

Both NoorderNieuws and a Telegram channel used by protesters report the shots were fired in or near Heerenveen, a town in the northern Dutch province of Friesland.

The incident occurred near the entrance to a highway, the A32.

A Twitter account for the regional branch of the Dutch National Police, Politie Fryslan, posted that tractor operators attempted to drive into officers and service vehicles at 10:40 p.m.

Law enforcement subsequently fired warnings and target shots, according to the post.

“A tractor was hit. A tractor drove away from the incident and was stopped shortly afterwards … Three suspects have been arrested. No one was injured,” the account continued in a follow-up post.

A Dutch investigative body, the Rijksrecherche, will issue a report on the incident, according to a third post on Twitter from law enforcement.

Although the police Twitter account asserted that tractors tried to drive into officers and service vehicles, the footage appears to show the incident does not clearly show the vehicle approaching either officers or service vehicles.

It appears to be following another tractor a few seconds ahead of it along a curving road, away from officers and vehicles visible in the frame.

The Epoch Times has reached out to Politie Fryslan for comment.