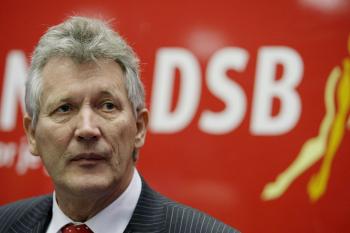 WOERDEN, The Netherlands—After a week of last-ditch attempts by owner Dirk Scheringa to save his destitute DSB bank, the curtain has fallen. The court in Amsterdam declared the DSB bank bankrupt at 9:00 a.m. Monday morning.

The DSB bank met with serious trouble after economist Pieter Lakeman in a Dutch television show had encouraged people to immediately remove their money from the bank. Within a few days more than 600 million euro of this relatively small bank was withdrawn, putting the DSB bank in a bad financial situation.

The Dutch National Bank, a supervisor, tried to rescue the bank by talking to several other major Dutch banks for a possible solution.

After news emerged that these attempts had failed, another bank-run quickly began. In order to prevent further loss, the Dutch court approved an emergency measure of freezing the accounts and putting the control into the hands of two appointed directors.

Dirk Scheringa, founder and sole stockholder of DSB bank, convinced the court four times last week, to give more time for finding a solution. Scheringa had talks with the Dutch Ministry of Finance, the major Dutch banks, and with the American private equity firm American Lone Star for possible solutions.

After his last plan, where savings accounts could be turned into stocks combined with a capital injection of 100 million by the Ministry of Finance in order to boost solvability, was denied, he could do nothing but give up.

"Four weeks ago everything was fine, four weeks later you are bankrupt. It is like a horror scenario," said Scheringa in a Dutch television program on Monday night.

Wouter Bos Minister of Finance declared that the DSB bank’s situation had nothing to do with the global financial crisis but rather with mismanagement leading to an unhealthy situation. He decided it would be unwise to put a lot of the taxpayers’ money into an unhealthy business.

The Minister answered with an analogy when he was asked why he didn't want to rescue the bank: "When somebody drowns it is not because he is not saved but because he cannot swim."

While many agree that Lakeman’s call on the Dutch television show was an irresponsible act that caused damage to DSB bank and its clients. It is also widely recognized that the true cause of the bankruptcy was the banks' bad reputation and immoral practices.

The bank has been accused of misleading customers when selling too high mortgages combined with insurances. The commissions charged were said to be extremely high and made up for the biggest part of the DSB income. These practices, however, caused much negative publicity.

A loss of income from these practices and a claim to compensate the victims hanging over its head caused further financial instability.

Scheringa mentioned in a press conference Monday after apologizing for the immoral selling tactics, that the bank had changed its products and was actually in the process of helping duped clients. And that the bank "had not gone bankrupt, but had been destroyed."

Bos said that history shows a takeover usually results in many clients still removing their money because their trust in the bank was gone, and would not be easily repaired. Scheringa didn’t share this opinion, but the public call from Lakeman and a newspaper publication last Monday sped up the process.

Scheringa has requested a parliamentary survey, while Bos announced an independent investigation into the roles of the different parties, including that of the Ministry of Finance.